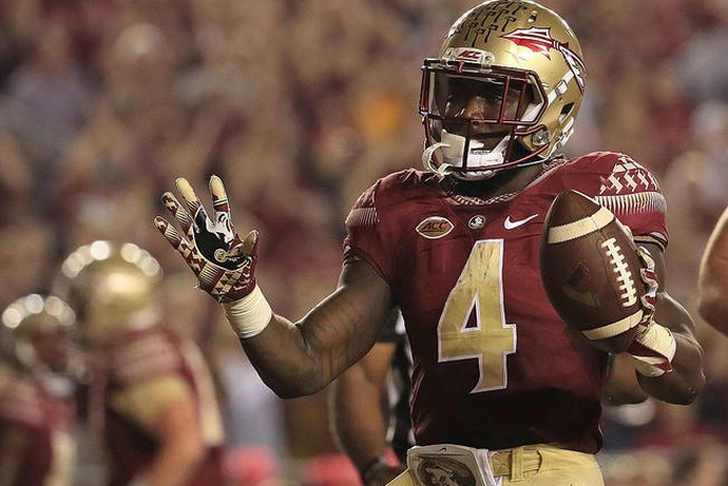 In perhaps the most thrilling bowl game we'll see this year, the Florida State Seminoles somehow got the 33-32 victory over the Michigan Wolverines in a wild finish. After getting a big lead early, Michigan stormed back to take the lead with less than two minutes left - only for FSU to score the game-winning touchdown with 36 seconds left. In a game full of outstanding plays and moments, here are the three biggest things we learned:

3) Michigan's offense line needs to improve this offseason
The Wolverines struggled to run the ball all night, racking up a total of just 89 yards on 36 carries, but they particularly ran into some difficult times in the red zone. Michigan failed to score a touchdown on three of their four red zone trips -  and they lost yardage on the three of those attempts in which they didn't score. Those are the two biggest areas that directly reflect offensive line play, and none of it was good for Michigan. After also struggling in a loss to Iowa and a win over Indiana at the end of the season, this should be a big area of focus for Jim Harbaugh in the offseason.

2) Dalvin Cook should be in the conversation for the best running back in the NFL Draft
Cook showed all of his skills in this one, gaining 207 total yards to lead the Seminoles to the win. He showcased his skills as a receiver with a 45-yard catch in the first quarter, and demonstrated tremendous power, speed and vision on multiple occasions - including this 71-yard run on a 3rd & 22:

Cook didn't always have a lot to work with against Michigan's defense line, but he found a way to make several game-changing plays. He and Fournette figure to be the top two running backs taken in the NFL Draft, and Cook displayed the all-around ability that could make him the first running back off the board.

1) Michigan really needs to find some offensive playmakers
In a problem that as plagued the Wolverines all year, only one receiver had over 9.3 yards per catch, and only one running back (of the handful that played) averaged over two yards per carry. They don't have anyone who can stretch the field or make something out of nothing, and as a result, Florida State's defense was able to stack the box and play very close to the line of scrimmage. That led to fewer openings for Michigan, and therefore less production for most of the game.

Wilton Speight was able to bring this unit to life in the fourth quarter, but Michigan needs a few other players to step up and give him some help for them to make the College Football Playoff next season.