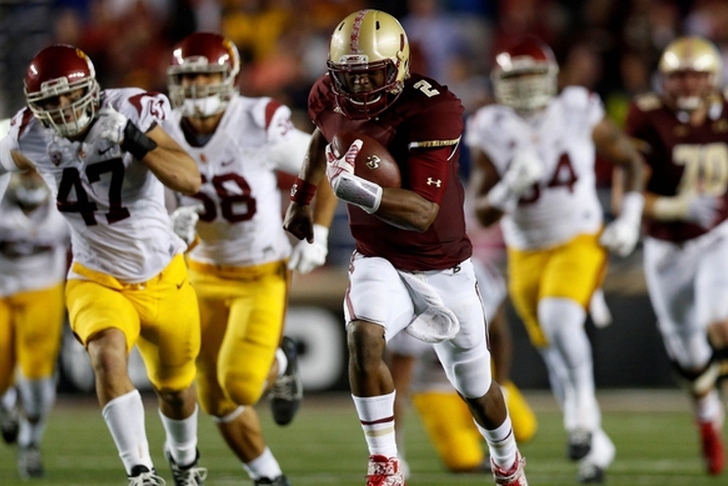 The Boston College Eagles ran through the cupcake portion of their schedule at a combined 100-3 clip (24-3 over Maine, 76-0 over Howard), but they'll experience a major jump in competition in their ACC opener on Friday against the #9 Florida State Seminoles. FSU has looked equally as dominant as BC over the season's first two games, but this will likely be a different story against an in-conference opponent on the road. Who'll come out on top in this pivotal early season matchup? Here's our Florida State Seminoles vs. Boston College Eagles Preview & Prediction.

A home win over the Seminoles virtually guarantees Boston College a spot in the AP Top 25, and maybe even a ranking closer to the Top 20 or Top 15. On the other side, Florida State can pick up some traction on the early College Football Playoff bubble with a quality road win inside the ACC.

Florida State QB Everett Golson has been rock solid in his first two games in a Seminoles uniform, completing 64.7 percent of his passes over two games for 465 yards, five touchdowns and a HUGE goose egg in the interception column. He'll have to contend with a formidable BC pass defense that effectively blanked Maine and Howard when both teams fell behind early. If the old 2014 Notre Dame Golson returns for a spell in this one, we're looking at a close contest that could trend towards an Eagles upset.

What They're Saying About Florida State:

What They're Saying About Boston College:

Studying The Film Heading Into This Week

Boston College is going to run it and run it some more with Jon Hilliman lined up in the backfield. He's dynamic enough and intelligent enough as a hole reader to bend Florida State's defense and help the Eagles dictate time of possession over long stretches. However, we're still taking Florida State on pure overall talent alone, even with Boston College likely covering with a late touchdown.