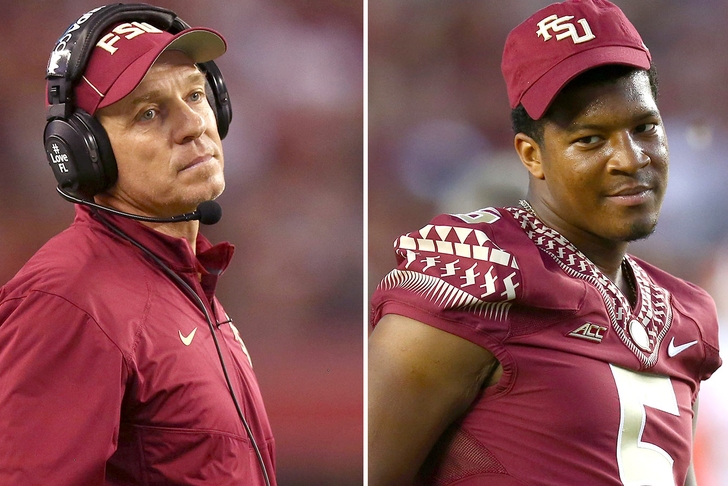 Florida State Seminoles quarterback Jameis Winston is currently awaiting a disciplinary hearing regarding sexual assault allegations from back in 2012. Regardless, Seminoles head coach Jimbo Fisher said in a teleconference on Monday that Winston is a go for this coming Saturday against Notre Dame.

Moreover, Fisher came out in full defense of his embattled quarterback - citing people's rush to judgement as the main concern surrounding Winston.

Here's Fisher's full teleconference quotes on the matter, courtesy of the Orlando Sentinel:

"There's nothing new come out. Everyone acts like this is earth-shattering," Fisher said. "It is concerning, but the facts of the case -- read the report. Read what's there. The facts are the facts. That's what they are. And when I see stories written that don't have all the facts -- that paint them towards their side of public opinion -- this country is based on being innocent until proven guilty, not guilty until proven innocent. There are two sides of that. I don't want a victim for anything, but there is no victim because there was no crime. We're convicting a guy over things that are not true, based on evidence. Now if that continues yeah, but there's no evidence."

An attorney who represents Winston's accuser informed the Orlando Sentinel that the case will be heard by a third party with no ties to the university.

Should Florida State Suspend Jameis Winston for the Rest of the Season?