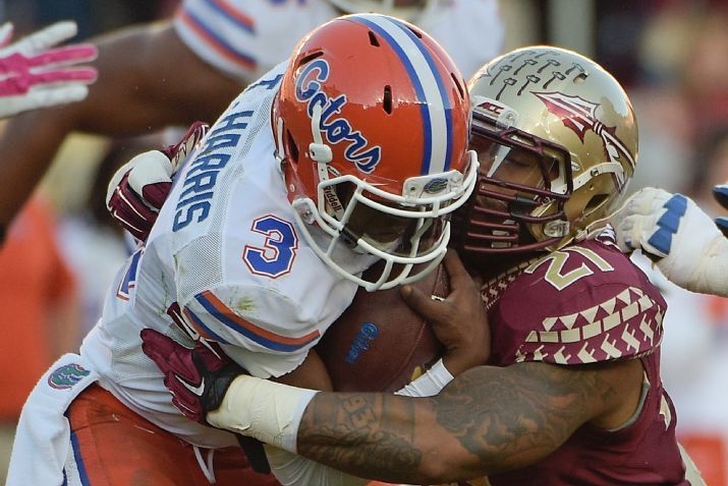 Florida got off to a strong start in Will Muschamp's last game as head coach thanks to three first quarter interceptions from Jameis Winston, but Florida State rebounded to take a 21-16 lead into halftime. The Gators threatened again after the break, but the Seminoles' defense stepped up as FSU held on for another hard-fought win.

Florida had all the momentum in the first quarter after intercepting Jameis Winston for the third time, but quarterback Treon Harris had a pass of his own picked off by linebacker Terrance Smith on the very next play. Smith returned it for a touchdown, cutting UF's lead to 9-7. The Seminoles used that momentum to get the lead later in the first half, and they n ever gave it back.

Florida committed 10 penalties in this game for 105 yards, including a few unsportsmanlike conduct penalties. Those penalties helped keep several Florida State drives alive and gave the Seminoles enough of an advantage to win the game.

Running back Dalvin Cook provided FSU with a spark when they needed in on Saturday night, rushing for 144 yards on 24 carries.

Florida State will face off against Georgia Tech in the ACC Championship Game next weekend, while Florida will look for a new coach while waiting to find out where they'll play this bowl season.