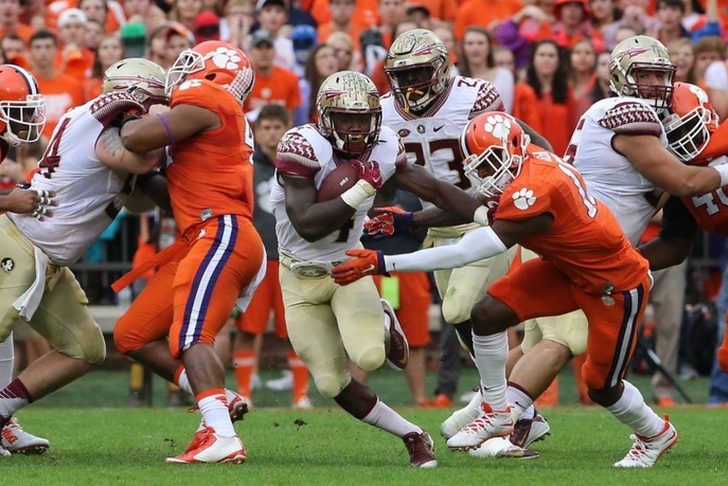 The Florida State Seminoles are virtually out of the College Football Playoff race after losses to Louisville and North Carolina, but they have a chance to redeem their season Saturday when Clemson comes to town. This has developed into a bitter rivalry, and the Noles would love nothing more than to send them home with a loss. Here are three reasons why Florida State will do just that and upset Clemson:

3) Clemson's unimpressive play
The Tigers are undefeated this season, but they certainly haven't looked the part. Four of their wins have come by single digits, and three of those came down to the final possession - where the other team had the ball and a chance to win. Clemson has played with fire too many times. Florida State will make the most of Clemson not playing up to expectations.

2) Dalvin Cook's greatness
Cook got off to a slow start this season but has been arguably the best back in the country since, rushing for 672 yards and five touchdowns - along with 238 receiving yards and another score - in just FOUR GAMES! Considering the way he's playing now - plus the way he has scorched Clemson last year (194 rushing yards, one touchdown) - all signals another huge night for Cook.

1) FSU's improved defense
Early in the season, Florida State's young defense looked very much the part as they were shredded by virtually everyone they played. However, they have tightened up of late, allowing a total of just 25 combined points to Miami and Wake Forest. With them playing improved ball, the Noles are a well-rounded team that has just as much talent (if not more) than Clemson.