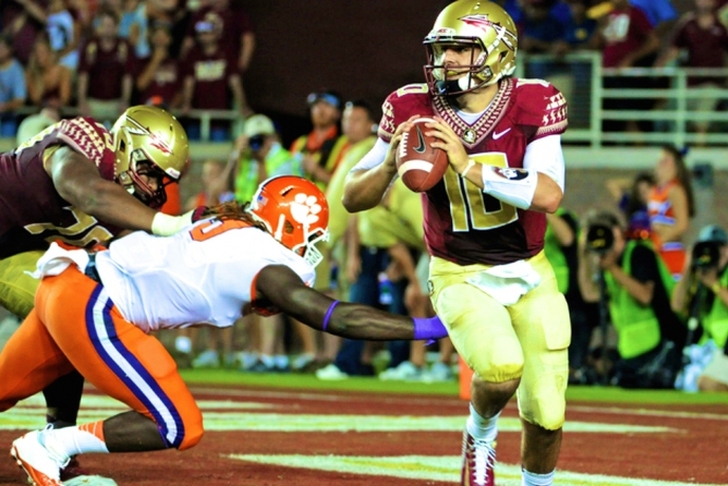 The Florida State Seminoles hit the road to take on the top-ranked Clemson Tigers this weekend with first place in the ACC and a potential spot in the College Football Playoff on the line. Here are three reasons why Florida State will beat Clemson and regain their place at the top of the conference:

3) Emergence of a downfield passing threat

Quarterback Everett Golson played fairly well for the Seminoles, but there's no denying how much more explosive the offense looked last week with Sean Maguire under center. He passed for 348 yards and three touchdowns against Syracuse last weekend, and two of his touchdown passes were from 45 yards and 75 yards. That ability to stretch a defense will open up more running lanes for FSU's dominant ground attack (more on that later) and make their offense almost impossible to defend.

2) Recent history of success vs. Clemson

Florida State has won four of the last five meetings between them and the Tigers, including a 51-14 demolition of Clemson the last time they squared off in Death Valley in 2013. It's clear that the Seminoles have Clemson's number, and that will certainly be in the heads of the Tigers on Saturday.

We all know about Dalvin Cook and his greatness (1,037 rushing yards, 11 touchdowns, NCAA-high 8.2 yards per carry), but the emergence of freshman Jacques Patrick as a power back gives the Seminoles a two-headed monster that could be better than anyone in the country. Expect Florida State to ride these two backs all the way to the finish line, and the duo will deliver.