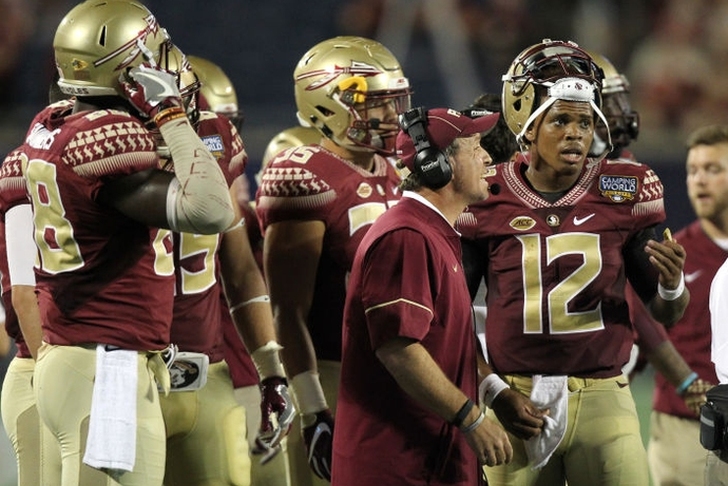 The Florida State Seminoles finished 2016 with a 10-3 record, marking the program's fifth straight season with at least 10 wins. Now, with most of their star players returning, FSU is one of a handful of national championship favorites for 2017. Here's how they rank in the way-too-early top 25 polls published by major publications:

Chat Sports
Ranking: 3
Breakdown: "The best running back in school history is gone, but the Seminoles are returning pretty much everything else from 2016's 10-win squad. Quarterback Deondre Francois is another guy who is expected to make "the leap" as a sophomore in 2017, and has a talented group of receivers returning, headlined by Travis Rudolph. All-American safety Derwin James​ will be back from injury to lead a supremely talented defense, with defensive ends Josh Sweat, Brian Burns and cornerback Tarvarus McFadden ready to turn into stars.

2016 was about a year of growth for the wealth of young talent on FSU's roster, all building towards the 2017 season. They will enter as the ACC favorites with the expectation of making the College Football Playoff. Even though the ACC hasn't released their conference schedule yet, we will get a look at just how good the Noles are in their season opener against Alabama."

USA Today
Ranking: 1
Breakdown: "The Seminoles stumbled out of the gate this past season before hitting another gear following a loss to Clemson in October. With valuable experience and as much talent as any team in the country, Florida State is the team to beat in the Atlantic Coast Conference and very deserving of the title of preseason No. 1 in August."

ESPN
Ranking: 2
Breakdown: "Since Clemson is losing star quarterback Deshaun Watson and a boatload of other starters, Florida State might be primed to retake the ACC in 2017. Star tailback Dalvin Cook will be sorely missed, but quarterback Deondre Francois was sensational in his first season as a starter. FSU's workhorse back next season could be sophomore Jacques Patrick or incoming freshman Cam Akers, who is enrolling early. Most of the Seminoles' defensive starters will be back, including safety Derwin James, who missed much of 2016 with a knee injury, but FSU will really miss DeMarcus Walker's pass-rushing skills (16 sacks, 21.5 tackles for loss). FSU opens the season against Alabama in Atlanta and plays Clemson on the road in ACC play, but Louisville and Miami will travel to Tallahassee next season."

CBS
Ranking: 3
Breakdown: "There's no Dalvin Cook and no DeMarcus Walker, but there is enough to push the Noles to another CFP appearance. Quarterback Deondre Francois and a deep receiving corps are good places to start."