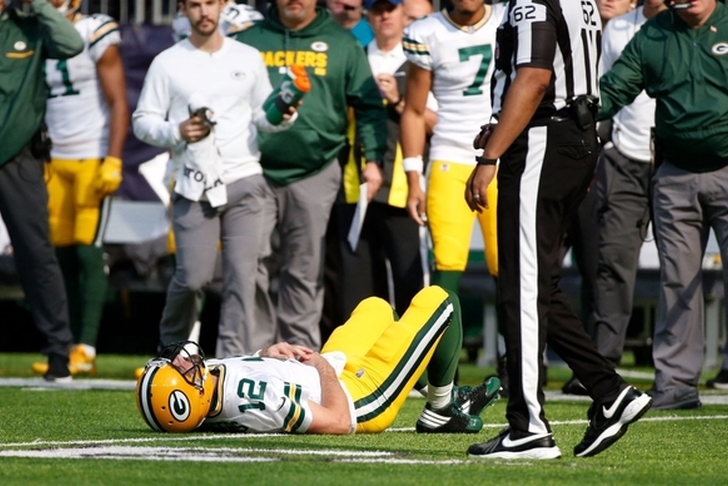 Aaron Rodgers took a big hit against the Minnesota Vikings on Sunday and so did his fantasy football owners. So the question is what do I do know? How do I replace Aaron Rodgers? The answer is simple for both his fantasy owners and the Green Bay Packers. You don't. There isn't another quarterback in the NFL who is like Rodgers so replacing him is impossible but I am here to help put a band-aid on your gash to the heart. If you were an owner of Rodgers please hit me up on Twitter @MitchellRenz365 or on Facebook.

You May Also Like: Aaron Rodgers Injury Update After Being Carted Off Field

QB Aaron Rodgers suffered a broken collarbone. There's a chance he could miss the rest of the season.

Luckily the quarterback position is deep in the NFL  so there should be some options on the waiver wire. If Rodgers is done for the season obviously it is time to drop him if he isn't out for the entire season I think you hang onto him in hopes that you can use him for the fantasy playoffs. My guess is Brett Hundley will be the new starter for the Packers so he may be worth a look on the waiver wire for Week 7.

The NFL without Aaron Rodgers is sad and gloomy. This season has been not kind in regards to big named stars getting injured. With Friday the 13th this past weekend, Chat Sports tried to warn everyone and I wish I would have followed directions.