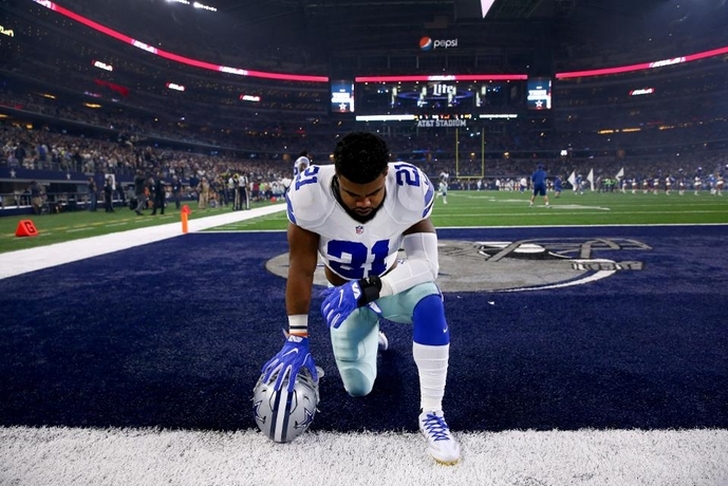 "Treat all fairly or they will seek revenge." - American Author Christopher Paolini. A great quote by a fantasy writer, sure his fantasy genre is much different than fantasy football but it's still a great quote. If Dallas Cowboys running back Ezekiel Elliott's career was a Netflix series, season two would be titled "The Revenge Campaign." Elliott will seek revenge on the entire NFL and Roger Goodell this season for the off-season distractions.

If you live under a rock (probably wouldn't be reading this if you did) and don't know why Elliott would be looking for revenge then I'd suggest reading Federal Court Makes Ruling on Ezekiel Elliott Case.

Elliot led the NFL in rushing with 1,631 yards and had 15 rushing touchdowns for the cherry on top. The second year running back out of Ohio State will look to improve those numbers in 2017. But every player looks to improve their numbers every season, the real question is will it be possible? Improving upon a rookie season like Elliott's won't be easy especially when you think about the fact he fell 177 yards short of Eric Dickerson's rookie rushing yard record. Let us not forget that Elliott also rested Week 17 in 2016.

History is also not on his side when considering rookie running backs who scored more than 180 standard fantasy points in their rookie season since 2012. Those running backs are Doug Martin (2012), Jeremy Hill (2014), and Todd Gurley (2015). All experienced sophomore slumps. The Tampa Bay Buccaneers 2013 record: 4-12, Cincinnati Bengals 2015 record: 12-4, and Los Angeles Rams 2016 record: 4-12. So two of the three teams had good seasons but the point I am trying to make is I believe in order for Elliott to have any chance of improving his rookie numbers the Cowboys need to be in positive game scripts and I would say they need to win 10 plus games.The Cowboys haven't had back to back double-digit win seasons since 1995-96.

There is no doubting the talent of Elliott but football is a team sport and the Cowboys aren't as talented as they were a season ago. Losing two key parts (Doug Free, and Ronald Leary) to their excellent offensive line which isn't being talked about nearly enough and the Cowboys defense is below average which may put the Cowboys in negative game scripts thus making them throw the ball a little more. So do I think Elliott will have a better rookie year in regards to fantasy points scored? The answer is no, I do not. However, I think he will have a great seconds year dodging the sophomore slump trend and will be a top three running back at the end of the season.  Just not quite as good as his rookie season due to a more difficult schedule and weaker Cowboys team around him. Zeke will still feast in terms of fantasy but his revenge season won't be quite as sweet as he and the Cowboys crave.