Fantasy Football Final: Everything You Need To Know From Week 11's Action 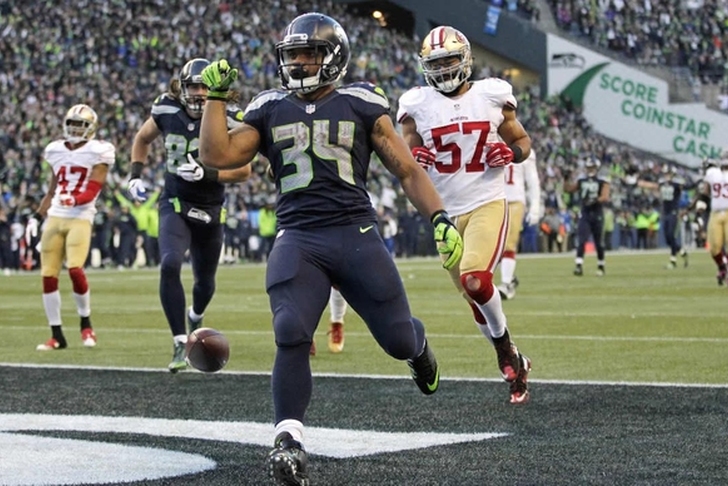 Only the last two Week 11 games are left, and I'm here to recap what happened in the wide world of fantasy football. I won't list everyone's individual stats, as that's something you probably already know or can easily look up. Instead, I'm going to give you one note from every team and what it might mean to your fantasy team going forward. So, here's everything you need to know from Week 11's Sunday action.

JJ Nelson, we see you. The Cards wideout led Arizona receivers with 142 yards and a touchdown on four catches. He's a big play threat if he's dangling out there on your league's waiver wire.

Jeremy Hill didn't get you many yards if you pegged him as a FLEX play this week (45), but he did contribute two short touchdowns. Fantasy owners will take that kind of production from the former borderline RB1/RB2.

Tony Romo wasn't exactly spectacular in his return, throwing for 227 yards on 66% passes with two touchdowns and two interceptions. However, once he gets into a rhythm again, he's an easy QB1.

Lamar Miller is a fantasy tease, mainly because the Dolphins forget to give him the ball sometimes. He had just 44 yards rushing on a scant seven carries, finishing with 55 all-purpose with no scores. He's still an RB2, but he's a risky RB2 because Miami doesn't seem to know how to use him.

Broncos RB Ronnie Hillman is a week-to-week flex play who paid off solidly today with a 100-yard rushing day. He didn't score, but today was still encouraging.

Stay away from the Chicago running game. Jeremy Langford is your best scoring play, but that's not saying much right now.

One reason why you should have cut every Lions running back in sight by now -- QB Matthew Stafford's 18-yard TD run today was the first rushing TD for the team since Week 3.

Oakland's offense is moving backwards. The worst of it for fantasy owners is WR Amari Cooper, who was targeted just four times today. He caught one of those for four yards.

Keep playing Frank Gore in PPR. He's Matt Hasselbeck's safety valve, catching five balls for 46 yards. He only rushed for 34 yards, but the reception points are there.

RB Devonta Freeman will be going through the NFL's concussion protocol after leaving the game on Sunday. Keep tabs on his progress as the week progresses.

The Texans passing game is spotty, but WR DeAndre Hopkins is still an unquestioned WR1. He caught five balls for 118 yards and two TDs today.

The Jets gave the ball to Chris Ivory just eight times today for 36 yards. Why the Jets handed the ball to Ivory for less than half of their carries, we'll never know. Approach his week-to-week status with caution right now.

WHOA, Jameis Winston. Winston tied a rookie record with five touchdown passes today, strengthening his foothold as a sneaky play when faced with the right matchup.

Don't pick up Mark Sanchez. He did throw for 261 yards and two scores, but he's an interception machine at times. He threw three on Sunday.

Both Ravens QB Joe Flacco (torn ACL) and RB Justin Forsett (broken arm) are out for the season after suffering injuries on Sunday. Hit the waiver wire accordingly. (Although if you were playing Flacco, you have bigger problems.)

The Rams' passing game is a mess, whether it's Nick Foles under center or Case Keenum. Keenum went 12 for 26 for 136 yards, fumbling three times and losing two.

What is going on with Washington's running game? Carolina's run defense is great and all, but 14 total yards? We're regretting picking up Chris Thompson already...

Philip Rivers is still a QB1, but he's down a notch with how messy this Bolts offense is. He had his worst game of the year on Sunday, throwing for just 178 yards and a pick.

So Eddie Lacy is a running back now? You could've fooled us early in the season, but he did pick up 100 rushing yards for the first time all season on Sunday. Still, proceed with major caution.

RB Adrian Peterson was stifled by the Packers run D, but he still picked up a touchdown to go with his 45 yards rushing. He also had two catches for 16 yards, turning in a decent PPR day.

Thomas Rawls has his breakthrough game, eclipsing 200 yards (209) and picking up a score. He also had three catches for 46 yards. He's an RB2 in a twelve-man, FLEX in a ten.

If you're playing anyone on the 49ers offense, we urge you to reevaluate your life choices.