Fantasy Football: 3 Replacements For Eagles Quarterback Carson Wentz To Get You Through The Fantasy Playoffs 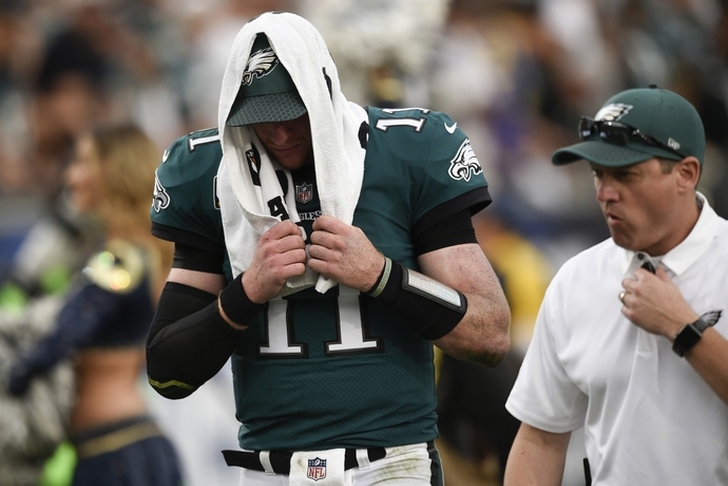 Considering how this season has plagued the NFL and fantasy football players with injuries, it shouldn't surprise anyone to see another star player go down with a major injury. The Philadelphia Eagles announced today that quarterback Carson Wentz suffered a torn ACL in their game against the Los Angeles Rams on Sunday.

Wentz appeared to suffer the injury on this play:

#Eagles QB Carson Wentz suffers a brutal knee injury against the #Rams. Sources say he could be done for the year. pic.twitter.com/yeAz5fbQms

The touchdown was called back because of a holding penalty, and Wentz finished off the drive three plays later with a short touchdown pass to wide receiver Alshon Jeffery. A few moments later Wentz walked into the locker room with a towel over his head and a sad look in eyes. He was ruled out with a left knee injury not long after walking into the locker room.

Wentz has been a hero for the Eagles franchise and fantasy football owners so replacing him won't be easy, but many will need to in order to keep their fantasy seasons alive. Here are three replacements for Wentz to get you through the fantasy playoffs who are under 50 percent owned.

To Note: If Aaron Rodgers, Blake Bortles, and Case Keenum are available, pick them up before these players.

Jimmy Garoppolo - 49ers
REMAINING OPPONENTS: vs. Titans (8-5), vs. Jaguars (9-4), at Rams (9-4)
The 49ers quarterback hasn't had a breakout game yet in terms of fantasy points, but he has led the team to back-to-back road wins against the Chicago Bears and Houston Texans. In his two starts this season he has 627 passing yards (313.5/game), one touchdown and one interception. In Week 15, he will get a tired Titans defense that has had four road games the last five weeks.

Nick Foles - Eagles
REMAINING OPPONENTS: at Giants (2-11), vs. Raiders (6-7), vs. Cowboys (7-6)
Why not pick up the guy who will be replacing Wentz at quarterback for the Eagles? Nick Foles threw for 42 yards and completed 60 percent of his passes. The Eagles are a talented team with plenty of weapons around Foles, which gives me the confidence he can perform well in Week 15 against the New York Giants. The Giants will most likely be without star safety Landin Collins after he was injured in Week 14 and we saw Dallas Cowboys quarterback Dak Prescott shred the Giants in that game for 332 yards and zero interceptions.

Deshone Kizer - Browns
REMAINING OPPONENTS: vs. Ravens (7-6), at Bears (4-9), at Steelers (11-2)
If you are in desperate need of a quarterback or perhaps in a two-quarterback league, fantasy owners can turn to Browns quarterback Deshone Kizer. Since wide receiver Josh Gordon returned to the team, Kizer has improved, throwing for four touchdowns and 429 yards in two games. Before Gordon arrived, Kizer had only five passing touchdowns the entire season. The matchups aren't the easiest for Kizer going forward, but he has looked much better with Gordon and a healthy Corey Coleman.