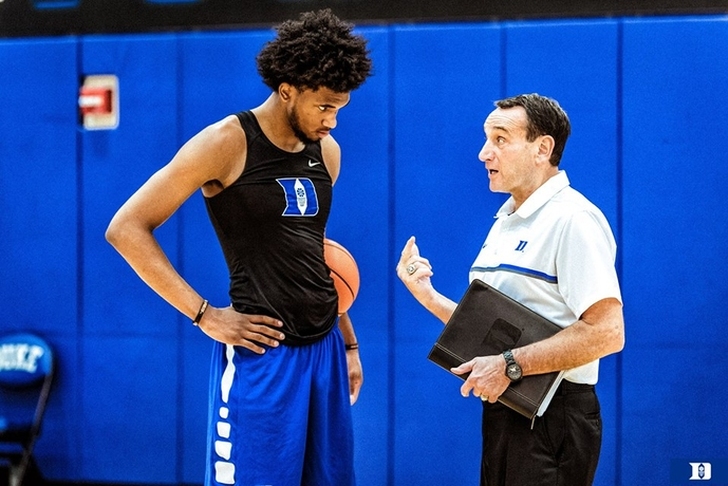 The Duke Blue Devils bounced back from a disappointing loss to NC State last weekend with convincing wins over both Pitt and Wake Forest this past week, doing the latter without head coach Mike Krzyzewski, who missed the game with a virus. We have the latest on Coach K's status for tonight's game against Miami and more in today's Duke basketball news. Here's everything you need to know:

Coach K expected to be on the sidelines tonight vs. Miami
Krzyzewski made the trip to Miami with the rest of the Duke team on Sunday and is expected to coach tonight against the 'Canes, according to the school.

Associate head coach Jeff Capel, who served as the interim head coach for Duke against Wake in Coach K's absence, said that Krzyzewski simply woke up with a virus on Saturday and didn't want to get anyone else on the team sick.

Capel previously stepped in for one game in 2016 against Georgia Tech and for seven games last season after Krzyzewski had back surgery.

Marvin Bagley's rap release
Duke freshman Marvin Bagley III is one of the best players in the country and is projected to be the No. 1 overall pick in the upcoming NBA Draft, but as ESPN's Elizabeth Merrill uncovered, Bagley may very well pursue a rap career on the side. In the piece, Merrill mentions that Bagley and some former Duke players may release some songs ahead of the NCAA Tournament.

The plan, right now, is for Bagley and possibly a couple of former Duke players to put together some songs for an extended-play recording that would be released sometime around the NCAA tournament. (Duke, which is still trying to figure out details of the project, declined to allow ESPN to shoot video of Bagley's rap session.)

Bagley is certainly not the first athlete to dabble in music as well and is not the only current basketball player in the rap game. Portland Trail Blazers guard Damian Lillard is the most notable rapper in today's NBA, having released two rap albums under the name "Dame D.O.L.L.A."

On the court, Bagley is tearing it up, averaging 22.5 points and 11.7 rebounds per game.

Jordan Tucker transfers to Butler
Former Duke freshman Jordan Tucker announced that he will transfer to Butler on Twitter today. He picked them over Georgetown after visiting this past weekend.

Tucker's recruitment was a bit of a whirlwind for the Blue Devils. After missing out on Kevin Knox to Kentucky, Duke offered Tucker a scholarship. He took an official visit to Durham a few days later and committed later that week. However, he only appeared in two games for the Blue Devils, averaging just seven minutes in those two appearances.