3 Things Duke Must Do To Make The Final Four 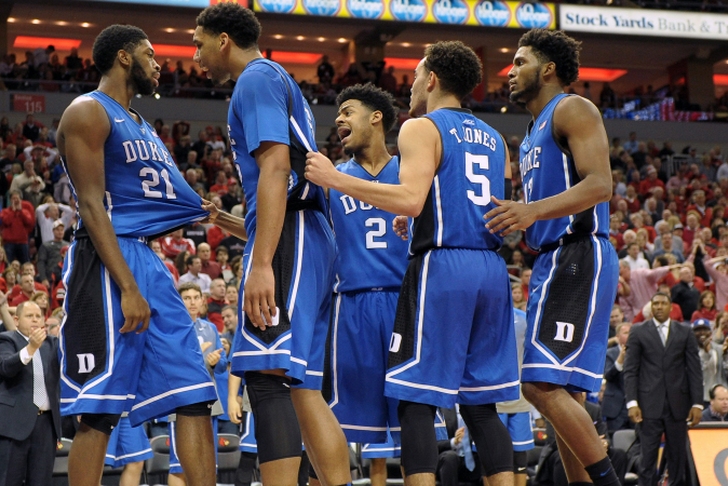 The Duke Blue Devils still grabbed the No. 1 seed in the South Region despite losing to Notre Dame in the ACC Tournament semifinals, and now will look to turn things around in the NCAA Tournament.

Duke hasn't had much success in the postseason during the past few years, being upset by Lehigh and Mercer in the first round in two of the last three years. However, this Blue Devils team has Final Four aspirations. What does Duke have to do to make it to Indianapolis?

Even with star center Jahlil Okafor being the focal point on offense, Duke’s calling card is still long-range shooting. Okafor’s dominance in the paint has forces opposing defenses to collapse, creating more open shots for Duke’s talented shooters. They make 38.6 percent of the three-pointers as a team, good for 30th in the country.

Quinn Cook is the team’s leading shooter from behind the arc (41.5 percent), but every perimeter player Duke puts on the floor is capable of going off from long range. If they get hot from three-point land, they can beat anyone in the country – including undefeated Kentucky. However, if they miss, they'll be in danger of being upset early in the tournament yet again.

Duke’s four losses this season have come against teams with good guards that can break down a defense off the dribble and shoot from long range. Coach K’s patented man-to-man pressure defense has been gashed by quick guards in can get around defenders easily, and that’s also contributed to Duke’s early round losses in two of the past three years. This is the one weakness that good opponents have routinely exploited against the Blue Devils, and Duke will have to fix this weakness to make the Final Four.

Duke can rely on Okafor and Cook to play well every night, but Tyus Jones and Justise Winslow are a bit more inconsistent - something you can expect from freshman. They're extremely talented and take the Blue Devils to another level when they're playing well - Jones has proven to be a big-time clutch performer and Winslow can be a double-doulbe machine. Now that the season has reached the do-or-die point, Duke needs both of them to play their best all the time to avoid a slip up that could cost them their season.

3 Reasons Why Duke Can Beat Kentucky

MUST WATCH: This Duke Hype Video Will Get You Fired Up For The NCAA Tournament

The 4 Most Memorable Moments In Duke NCAA Tournament History