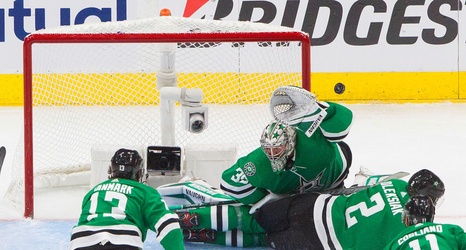 Edmonton, Alberta – Anton Khudobin gloved the puck out of the air on Shea Theodore’s shot at the most intense moment of the game like it was part of a leisurely morning practice.

“I just tried to find the puck and react to it,” Khudobin said with the same nonchalance. “I don’t know if it’s luck or whatever. Let’s call it luck.”

It’s not luck. It’s a goaltender so locked in that he has the Dallas Stars one victory away from the Stanley Cup Final.

Khudobin made three of his 32 saves on a crucial 5-on-3 penalty kill late, Joe Pavelski and Jamie Benn scored in the second period and the Stars locked down on the Vegas Golden Knights in the final minutes to win Game 4 of the Western Conference final 2-1 Saturday night.