Here's The Latest On The Ezekiel Elliott Appeal, Suspension And Lawsuit Filed Against The NFL 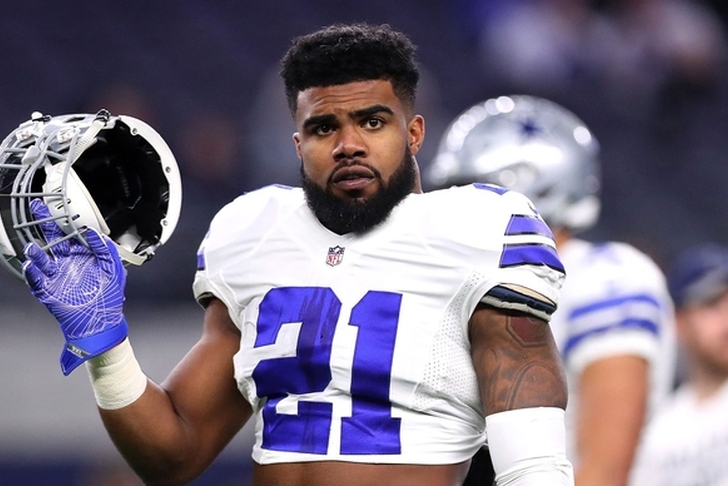 The Ezekiel Elliott appeal hearing wrapped up on Thursday, but the NFLPA and Elliott's camp aren't wasting any time in continuing to challenge the NFL's six game suspension of the Dallas Cowboys running back. The NFLPA has filed a lawsuit in a Texas court already against the NFL, alleging a conspiracy against Elliott. All of the details on that lawsuit and everything know about the Ezekiel Elliott suspension and appeal are detailed below.

The time for the hearing of the lawsuit has been set:

The Lawsuit
While arbitrator Harold Henderson is being pressured to make a decision in the coming days, the NFLPA is taking preemptive steps. Believing there were procedural errors committed during the investigation, the NFLPA filed a lawsuit in Plano, Texas to gain a temporary injunction and block any upholding of Elliott's suspension. Here's what the lawsuit states:

"In what may mark one of the most fundamentally unfair arbitral processes conceivable, Elliott and the Union were subjected to an arbitration process in which, among other things, there was a League-orchestrated conspiracy by senior NFL executives, including NFL Senior Vice President and Special Counsel for Investigations Lisa Friel, to hide critical information—which would completely exonerate Elliott—from: NFL Commissioner Roger Goodell, who imposed the discipline; the outside expert advisors who were appointed by the Commissioner to counsel him on imposing discipline; the NFLPA and Elliott; the Dallas Cowboys; and NFL fans."

The goal here is to put the lawsuit in a favorable jurisdiction for the NFLPA and Elliott and to have him able to play this year.

What Are The Grounds?
That's a pretty bold claim by the NFLPA. Here are the top highlights from their claim.

The first two are already known and reported: Elliott didn't get a chance to confront the accuser in the appeal hearing via a cross-examination. The NFLPA wasn't even granted access to the notes from the Thompson interview. The NFLPA also claims not having Goodell present, given he is in charge of discipline, was a "deprival of fairness." The NFLPA has also maintained that Harold Henderson, a former NFL employee is not a neutral party.

But that's not the main argument behind the lawsuit. It's that Kia Roberts, who conducted the interviews of the accuser, did not believe her to be credible. She did not believe that there should be any discipline of Elliott. Despite being a co-author of the report, Roberts' conclusion was not present in the final report. In addition, Roberts was barred from the final meeting to determine discipline and that another NFL investigator did not tell anyone of Roberts' doubts.

More On Roberts
This is the type of bombshell that actually gives NFLPA a legitimate case. And it lends serious credence to the belief that the NFL's investigation of Elliott was a witch-hunt. That last section had the "too long; didn't read," but here's what lawsuit itself states. You'll see a reference to a "Friel" - that's Special Counsel for Investigations Lisa Friel.

"In imposing discipline against Elliott despite the absence of any action by law enforcement, the NFL conducted a massive investigation that lasted more than a year, co-led by  Roberts, who interviewed every fact witness personally. This massive amount of work resulted in a final investigative report (“Elliott Report”) which, unlike virtually every similar NFL investigative report in the past, deliberately omitted a conclusion. Had the report stated a conclusion, Roberts, as co-author, would have had to reveal her conclusion, as an experienced lawyer and prosecutor, that there was not sufficient evidence to proceed with any discipline. Unbeknownst to Roberts, it was Friel—who believed that the evidence was sufficient to support the imposition of discipline—along with NFL counsel, who determined that the report should be void of a conclusion.

"Based on the Elliott Report, the Commissioner determined—without the benefit of the deliberately concealed conclusions reached by Roberts—that there was not credible evidence of a policy violation, and that Elliott committed three—out of five—alleged acts of domestic violence against Thompson. This flawed determination by the Commissioner was also based on advice he received from four designated outside expert advisors, but those experts too were prevented from learning of the conclusions reached by the NFL’s co-lead investigator about the lack of credibility and evidence to support the accuser’s claims. Indeed, when one of the advisors, Mary Jo White, a former prosecutor herself, asked Friel what conclusions Roberts had drawn from the evidence gathered, Friel only admitted that she (Friel) had concluded that one of the five claimed incidents was not credible. As for the rest, Friel did not reveal the conclusions of Roberts that all of the allegations were not credible and could not be supported, and instead gave the impression that the other allegations were found to be credible. There was also a deliberate decision to keep Roberts out of this critical meeting with the advisors, as part of the overall conspiracy to conceal her conclusions from the Commissioner, the player, the Union, the Cowboys, and the world."

The NFL, meanwhile, has stated that the league knew of Roberts' views.

“I can tell you without any hesitation that this is false,” NFL spokesman Joe Lockhart told Pro Football Talk. "“It’s categorically false that the information was kept from the Commission. The findings were not based on the testimony of any one witness. It was based on evidence through forensic sources and it was corroborated in the process."

Why Jerry Jones Was So Livid
Remember the reports that Jones was furious about the decision to suspended Elliott and was convinced leading up there would be no suspension? Well according to the Fort Worth Star-Telegram, that's because Jones was told by an NFL executive there wouldn't be.

"Roberts’ recommendation of no discipline is the main reason Cowboys owner Jerry Jones expressed so much confidence in the case until the NFL announced the suspension on Aug. 11," Clarence Hill writes. "Jones was told by a top NFL executive that there would be no suspension, according to a source."

Having been told there would be no suspension and knowing the thoughts of one of the main investigators, it's easy to see why Jones was so upset.

Okay, So What Does All That Mean?
Well it's not good for the NFL. Some have thought the Elliott suspension was one of optics: designed to make it look like the NFL was tough on domestic violence and conducted a witch hunt. Those who entered with those beliefs have only had confirmation with the NFL lawsuit. Because right now, it looks like the NFL ignored the recommendation that said Elliott shouldn't be disciplined. The NFLPA faces an uphill battle because of precedent with the Tom Brady case, but they will fight tooth and nail. And if the lawsuit's claims are accurate, well, Pro Football Talk sums it up well.

If these allegations in the Elliott lawsuit are true, some high-level people currently working at 345 Park Avenue eventually won't be.

Oh by the way, if Elliott's father is to be believed, there might be more left to come out.

And most importantly, this case is far from over. It's headed to court and it will remain ugly.