Cowboys Winners And Losers From The Hall Of Fame Game 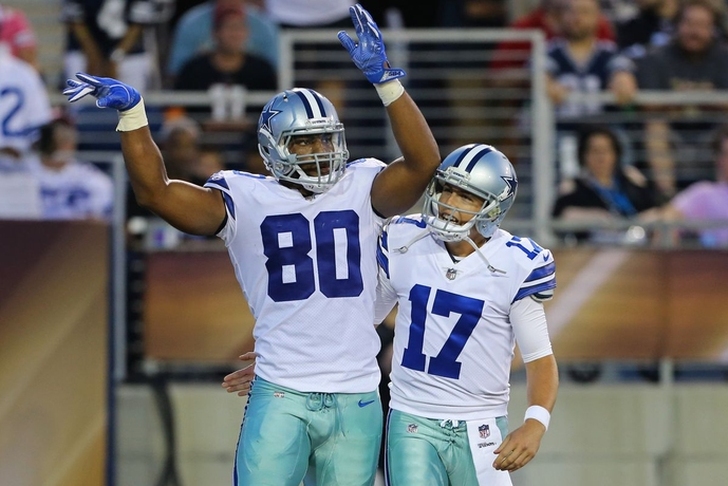 The Dallas Cowboys held on for a 20-18 win over the Arizona Cardinals in the Hall of Fame Game, but it's the end result that matters in the preseason. Rather, it's far more important to see how individual players fared. The preseason games are critical for young players, rookies and those battling for starting jobs and roster spots. With that in mind, here are six winners and three losers from the Cowboys' Hall of Fame Game. They're in no particular order.

Alfred Morris
This was the best I've seen Morris play since he was in his prime with the Redskins. Morris wasn't good last year and was relegated to the fourth RB on the depth chart in training camp. But he got the second crack at the carries Thursday night and made the most of them. He looked quicker than he did last year and this spin move was beautiful.

Morris still faces a tricky roster battle, but racking up 42 yards on just seven carries helped him. At the very least, it helps the Cowboys' chances of trading Morris.

Rico Gathers
On Wednesday's Cowboys Report, I made the decision to start calling Rico Gathers "Watson Williams" in an effort to pump the brakes on an already too fast hype train. Well that effort was wasted after Thursday. Gathers caught three passes for 59 yards and this TD.

Converted basketball player Rico Gathers reels in a 26-yard TD catch from Kellen Moore to put the #Cowboys on the board! #HallofFameGame pic.twitter.com/2WiyCSbypo

The Gathers hype train is off to full speed and plays like those help his roster chances if any because the Cowboys won't want to risk trying to stash him on the practice squad. But in the interest of not overreacting, Gathers is far from ready to take over as Jason Witten's heir or even as a No. 2 TE. Gathers still can't block and he frequently wasn't the TE for blocking situations (Blake Jarwin handled that). Gathers is still very, very raw, but at least he's showing he can catch.

Brice Butler
There was some buzz leading up to training camp (including from myself), that Butler wasn't guaranteed a roster spot. Well, he abused Brandon Williams and was the best WR on the field. He only caught two passes, but they were for 78 yards.

Butler isn't a great WR, and he's not going to supplant Terrance Williams, but that was an impressive effort. He should be the first outside WR off the bench this year.

Rod Smith
Jaylon Smith didn't play in the Hall of Fame game, but his brother did. Currently in a battle with Morris, Smith looked pretty good as well. He wasn't quite the effective runner that Morris was, but he still posted 18 carries for 64 yards. He also caught three passes for 25 yards and had a 16-yard run called back for what I thought was an iffy penalty. Smith offers more in the passing game and on special teams than Morris does and that's huge for his roster chances.

A quick honorable mention to Keith Smith, who looked good in the passing game.

Kellen Moore
I'm not a Kellen Moore fan as a No. 2 QB. He has a future as a coach because of his intelligence, but I don't think he's a quality backup. That said, I liked what I saw from Moore in the first half of action. He completed 12 of 17 passes for 182 yards, 1 TD and 1 INT. The throw to Gathers was a pretty one and Moore looked sharp in his first game action in over a year. I still want a different QB as the backup, but Moore's effort did make me feel a little bit better.

Anthony Brown (And Some Of The Secondary)
For the most part, the Cowboys avoided injuries in the Hall of Fame Game. The one notable one was to CB Anthony Brown, who suffered a hamstring injury. Brown says it's minor, but hamstring injuries can linger, Jourdan Lewis is dealing with one of his own and the Cowboys need their CBs to step up this year. Unfortunately, they didn't really do that against Blaine Gabbert. He actually looked good, completing 11 of 14 passes for 185 yards in one half of action. The secondary wasn't totally to blame and several players fared well. Byron Jones was the best player on the field, but why was he even out there? Those reps could have gone to Xavier Woods, a rookie who needs them and didn't get onto the field until very late.

Chidobe Awuzie was inconsistent, but did show enough flashes. He was a bit off early, but nearly had a pick late.

The secondary weren't total "losers," but they'll need to be better going forward.

Taco Charlton (And The Pass Rush)
Take it from defense coordinator Rod Marinelli, Taco Charlton simply "wasn't good enough." In fact, that was the case for the entire pass rush for the Cowboys. Yes, some of the top options didn't play, but no defensive lineman recorded a sack. Blaine Gabbert is awful under any pressure, but actually decent when he has time. He had time against the Cowboys and it showed. Charlton is still developing (he needs another move other than his spin move) and he might not provide the instant impact many hope. The rest of the defensive line didn't look too great either. Charles Tapper, in his first game back, looked pretty good despite not making an impact in the box score. He has the quick twitch some of the other DEs lack. Don't be surprised if he outplays Charlton this year as a pass rusher.

Darren McFadden (And The Starting OL)
McFadden did not fare well in his limited snaps. He had three carries, but ended up with -6 yards. The Cowboys tried to run the zone stretch a few times with McFadden and it did not work. The line was blown back several times, including RT La'el Collins (who fared much better in pass protection), ruining any chance McFadden had. That's a worrisome sign, but he's still the RB2. Remember, let's place more stock into McFadden's 4.5 yards per carry average and Morris' 3.5 than one preseason game.