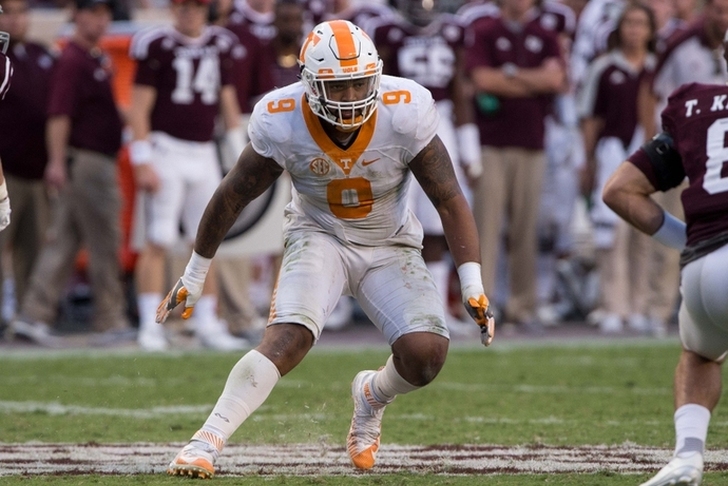 The Dallas Cowboys hold the No. 28 pick in the NFL Draft, and they are hoping to add several impact players - particularly on the defensive side of the ball - to help them take another step forward and compete for the Super Bowl again next year. Here are all the latest Cowboys news & rumors you need to know:

Dallas interested in Derek Barnett
The Cowboys haven't been shy about their desire to add a top-end pass rusher in the first round of this year's draft, and one of the defensive ends they're keeping a close eye on is Tennessee's Derek Barnett, according to Bleacher Report's Mike Chiari.

Defensive end prospect Derek Barnett has reportedly met with the Dallas Cowboys, Tampa Bay Buccaneers and Atlanta Falcons leading up to the 2017 NFL draft at the end of the month.

According to NFL Network's Ian Rapoport, the meetings with the Cowboys and Bucs were recent, while the former Tennessee Volunteers standout had a personal workout with the Falcons.

Barrett had 56 tackles, 19 tackles for loss and a career-high 13 sacks last season for the Vols.

Cowboys also targeting Charles Harris?
Missouri's Charles Harris is another player in that group of potential first-round defensive ends that the Cowboys are targeting, and SB Nation's Danny Phantom thinks Harris would be the best pick for Dallas.

Some view this as the Cowboys settling after missing out on the “dynamite” edge rushers in the draft, but that might be a little presumptuous because Harris could be every bit as good as those other guys. In fact, right now - he’s better.

Harris possesses a lot of great edge rushing qualities. As far as get-off speed, he is lightening quick and offers up that great first-step Rod Marinelli looks for. He’s a missile off the line of scrimmage and maintains great balance throughout the rush. He doesn’t allow himself to be pushed to the ground despite making sharp turns and being in compromising angles. He can tear up interior linemen and has a great spin move that allows him to burst inside. His fundamentals are first rate and he has an arsenal of pass rushing moves. He’s one of the most NFL ready edge rushers in the draft.

Harris had 61 tackles with 12 tackles for loss and nine sacks last season.

NEXT READ: Why The Cowboys Should Sign Robert Griffin III

UTEP RB Aaron Jones receiving interest from Cowboys
Despite having Ezekiel Elliott, Darren McFadden and Alfred Morris all under contract for next season, the Cowboys are still showing interest in Aaron Jones, a fast-rising prospect from UTEP, according to Kristian Dyer of the Sporting News.

Follow our Dallas Cowboys team page for all the latest Cowboys draft rumors or download the Chat Sports App!