Browns vs. Ravens Preview and Prediction 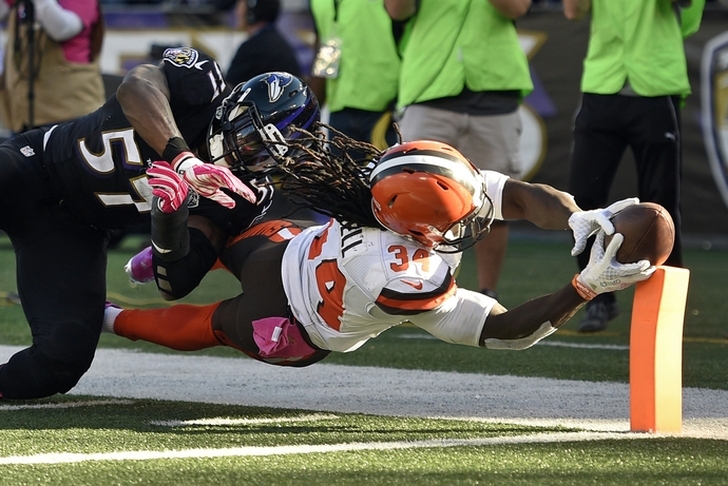 The 2-8 Cleveland Browns host the 3-7 Baltimore Ravens on Monday Night Football in a battle to stay out of the AFC North's cellar. It's been a rough year for both teams, as the Browns have lost several close games and struggled in the second half of games. The Ravens have been plagued by injuries and are without their QB, RB and top two WRs. So will the Browns or Ravens pick up a win? Here's our preview and prediction.

This game opened as a pick, but the line has been betted up in favor of Cleveland.

The Browns and Ravens are both playing for pride at this point, although the Browns could be playing for Mike Pettine's job as well. The Ravens are looking for revenge after losing 33-30 to Cleveland earlier this season. While neither team likes losing and wants to avoid coming in last in the AFC North, there is a bright side to losing. Both teams are also in the running for the first overall pick in the NFL Draft and are in position to get an impact player early in the draft. Neither team appears willing to tank, but don't be surprised if the front office has already turned much of their attention to the draft.

What They're Saying About The Baltimore Ravens:

Matt Schaub Getting Another Chance

Ravens Could Start 3 Backups On O-Line

What They're Saying About The Cleveland Browns:

Will Johnny Manziel Be Active?

How do the Ravens' backups play and will the Browns adjust in the second half? Those are two separate keys to the game, but they'll both be critical. The Ravens are just depleted across the board, and they're going to rely on backups to pick up a win. That's not a recipe for success and it's why the Ravens have struggled. The Browns have competed in most of their games, especially early. However, they've failed to close games late. That's due to poor second half adjustments, which fall on the shoulders of Pettine. If the Browns can step up with a few key adjustments throughout the game, they'll be in position for a win.

It's not a pretty game, but that's to be expected since these teams are among the worst in the NFL. The Browns pick up the win, thanks to above average play from QB Josh McCown. He's not the long-term answer, but he plays well enough to capitalize against an injured Ravens' defense