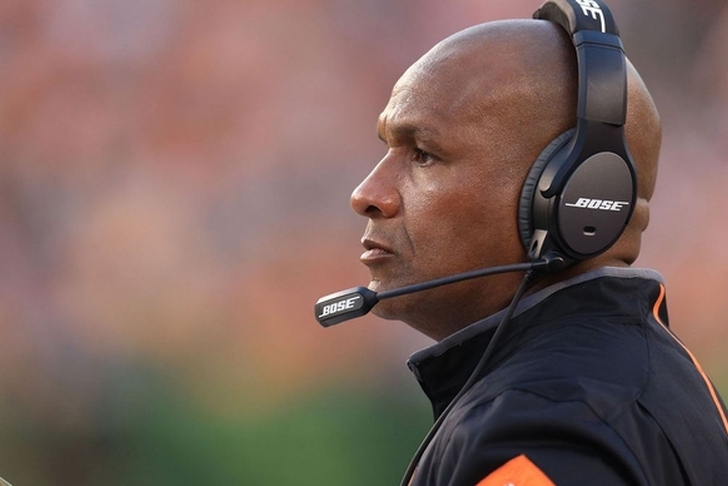 Guys, this an April Fools article from 2016. Here's the real article on the Browns firing Hue Jackson.

Just 2 1/2 months after claiming that new head coach Hue Jackson "embodies all the qualities that will provide strong leadership for our football team", Browns owner Jimmy Haslam has changed course, firing the former Bengals offensive coordinator less than 3 months on the job.

"Our fans deserve to see a consistently competitive team. We have high standards, and there's an urgency for success. When we believed we were not positioned to achieve significant progress in 2016, we knew we had to admit that a change was needed, and move forward," Haslam told reporters at a press conference that just concluded.

Lifelong Browns fans have grown used to the team firing coaches after very little time on the job - local union worker Fred Harris told us he wasn't surprised at all by the move.

"The guy hasn't won a single game as coach here. I've been watching the Browns for 27 years, and he's won fewer games as our coach than anyone I can remember. He had to go."

Jackson was called into a meeting this afternoon, shortly after enrolling his children in local schools and taking out a mortgage for a new home in Chagrin Falls, OH. It was there that Browns owner Jimmy Haslam, Executive Vice President Sashi Brown, and new Chief Strategy Officer  Paul DePodesta informed Jackson of his dismissal.

DePodesta, in his first job in the NFL after a long career championing the "Moneyball" philosophy of baseball, was rumored to be skeptical of Jackson's coaching style. In an off-podium chat with reporters, he confirmed many of the rumored concerns.

"These philosophical differences (between Money(foot)ball and Jackson) would exist whether we won 1 or 16 games, ... And we would be changing coaches regardless of our record. It's not necessarily about disagreeing with me. It's ultimately about all of us in football operations being on the same page," DePodesta commented.

Jackson becomes the 4th Browns coach to be fired in last 39 months, and the move will be perceived as a classic case of indecisiveness. Haslam has already emailed season-ticket holders, pleading for patience - only time will tell if they'll be rewarded.

A number of players expressed shock and dismay at the move. "It's just absurd to me that a good coach like that would be out so quick," Browns WR Brian Hartline said. "It's crazy, and that (ticked) me off when I heard it."

ProFootballChat.com reports that Jackson's staff has been retained for the moment, with Special Teams Assistant Coach Shawn Mennenga taking over as interim head coach.

"I'm just as confused as you are. I was just sitting at my desk playing minesweeper when DePodesta came in and told me I'm the acting head coach. I don't even know what our playbook looks like," Mennenga said.

Where do the Browns go from here? In an interview with ESPN radio Friday afternoon, Adam Schefter cautioned people to “expect the unexpected” in the Browns’ coaching search.

It's currently unclear who Haslam has in mind to take over in Cleveland, but the embattled owner was spotted in Tuscaloosa last night having dinner with Alabama offensive coordinator Lane Kiffin.

This article is an April Fools' Joke. This did not actually happen, although we wouldn't be that surprised if it did.