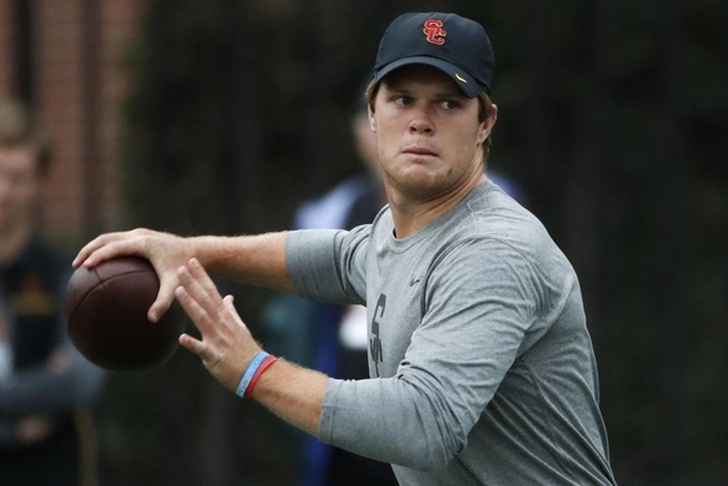 The Cleveland Browns have put themselves in a great position going into the 2018 NFL Draft following a great offseason to this point and, with the No. 1 and No. 4 overall picks, the Browns should be able to land a pair of star players the franchise can build around. Obviously, finding a franchise quarterback is at the top of their priority list, and they're doing their due diligence on all of the top quarterbacks. Here are the latest Browns draft rumors you need to know:

Sam Darnold wants to play for Browns
The Browns were one of many teams at USC's Pro Day yesterday to see quarterback Sam Darnold, who they are expected to take with the No. 1 overall pick. That feeling appears to be mutual as Darnold said yesterday he wants to go to Cleveland, according to The MMQB's Albert Breer.

USC staffer: Hey guys, the weather patterns show that it’s gonna start raining right when we’re getting ready to throw. So we’re gonna move everything around, and have you throw before it rains and then have the o-line/d-line workout in the rain.
Darnold: Why are we doing that?
USC staffer: Well, so you don’t have to throw in the rain.
Darnold, looking to Palmer: No, we’ll just throw in the rain, right?
Palmer: Yeah.
Darnold: Perfect. I don’t care if it rains. I’m trying to go to Cleveland.

Darnold passed for 4,143 yards with 26 touchdowns and 13 interceptions while rushing for 82 yards and five more scores.

Busy week for #OU QB Baker Mayfield: #Dolphins coach Adam Gase is working him out today. #Bills workout was Monday. #Browns is tomorrow and #Jets is Saturday. Many of the QB-needy teams get a look.

Bills interested in trading for top pick?
While it appears that Cleveland is preparing to take a quarterback with that No. 1 overall pick, the team has also expressed a willingness to trade that pick - and the Buffalo Bills have called them about acquiring it, according to NBC's Dan Patrick.

Dan Patrick says on @dpshow the #Bills have contacted #Browns about No. 1 pick in draft. Was reported over the weekend #Jets called before moving up to 3. John Dorsey said to call & teams are.

The No. 1 pick was last traded in 2016 when the Los Angeles Rams sent a package that included two first-rounders and two second-rounders to the Tennessee Titans to select Jared Goff.