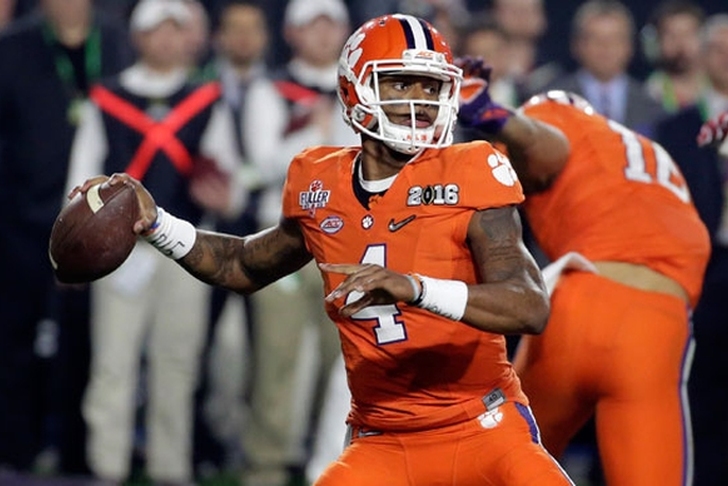 The Clemson Tigers waited all year for a chance to get revenge for last year's loss in the national championship game to the Alabama Crimson Tide - they didn't blow their chance when they got it.

After trailing for nearly the entire game, Deshaun Watson led the Tigers down the field in the final two minutes of the game, throwing a two-yard touchdown pass to Hunter Renfrow with one second left to win the game, 35-31. It's the second national championship in program history, the first since 1981.

Early on, the Tide used the power running game to build the early 14-0 lead, courtesy of touchdown runs of 25 and 37 yards from Bo Scarbrough.

However, Alabama's offense went into a lull after that touchdown, allowing Watson and Clemson's offense to come alive and get them back in the game.

Watson found the end zone on an eight-yard run before halftime, and after an Alabama field goal at the start of the third quarter, a touchdown pass from Watson to Renfrow suddenly found Clemson down just three. The two sides traded touchdowns after that, and it looked like Alabama was set to win another national title after this 30-yard touchdown run from Jalen Hurts.

However, the Tide simply left two much time left on the clock. Watson methodically moved the Tigers down the field to get them in field goal range to tie the game and force overtime, but they wanted to win. Then, on the last offensive play of the game, Watson found an open Renfrow in the end zone.

For Clemson, Watson had his best game of the year, completing 36/56 passes for 420 yards and three touchdowns while rushing for 43 yards and another touchdown. Renfrow finished with 10 catches for 92 yards and two scores.

Scarbrough was the player of the game for the Tide, finishing with 93 yards and those two touchdowns on 16 carries before leaving the game in the second half with an ankle injury. Hurts completed 13/31 passes for 131 yards and a touchdown while rushing for another. Their defense has led by linebacker Ryan Anderson, who forced one fumble and recovered two.