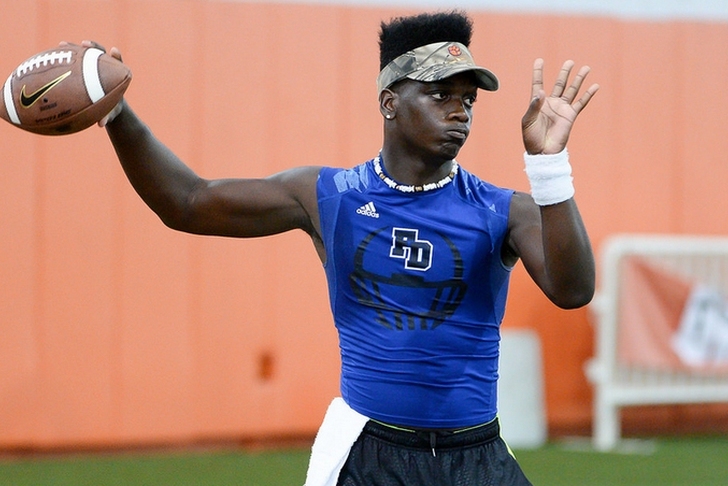 The Clemson Tigers are focused on beating South Carolina, winning another ACC Championship and returning to the College Football Playoff, but that doesn't mean they've slowed down on the recruiting trail. In fact, the Tigers' 2017 class already ranks in the top 10 nationally with 14 commitments. Here are all the latest Clemson football recruiting news:

Tigers going hard after 4-star QB
Clemson already has the top quarterback in the 2017 class in Hunter Johnson, but that doesn't mean they're done looking at quarterbacks in future classes. They've been going hard after four-star 2018 quarterback Dakereon Joyner (North Charleston, SC), and according to TigerNet.com's David Hood, they're at the top of his list.

RB commit loves "everything about Clemson"
Four-star running back Cordarrian Richardson (Memphis, TN) committed to Clemson in March, but had not seen a Clemson game until he came for their loss to Pitt. Despite that loss, Richardson came away impressed.

"It was amazing," Richardson said. "To be honest, I just love everything about Clemson. From the coaches to the fans, just everything. The fans, they really stood out to me."

Clemson maintains lead for 4-star DE Stephon Wynn
Four-star defensive end Stephon Wynn (Anderson, SC) has offers from numerous ACC and SEC programs, but Wynn is very open about the fact that Clemson leads for his services, according to Anna Hickey of 247sports.

The 6-foot-4, 247-pounder is ranked as the No. 3 strong-side defensive end and No. 59 overall prospect in the country.