Blackhawks hang on for dramatic 5-4 win over Maple Leafs 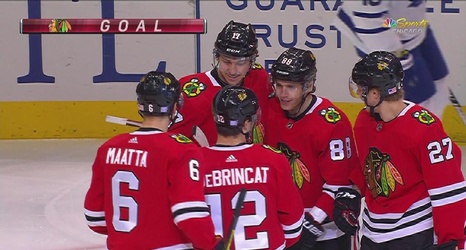 For the majority of the third period, it looked like the Blackhawks were going to blow yet another third-period lead. But a late goal helped Chicago hang on for a thrilling 5-4 win over the Maple Leafs on Sunday night at the United Center.

Chicago dominated the play early on. A little more than five minutes in, Patrick Kane’s attempted centering pass ricocheted off Toronto’s Cody Ceci and into the Maple Leafs’ net for an early 1-0 Chicago lead.

SECURITY WARNING: Please treat the URL above as you would your password and do not share it with anyone.