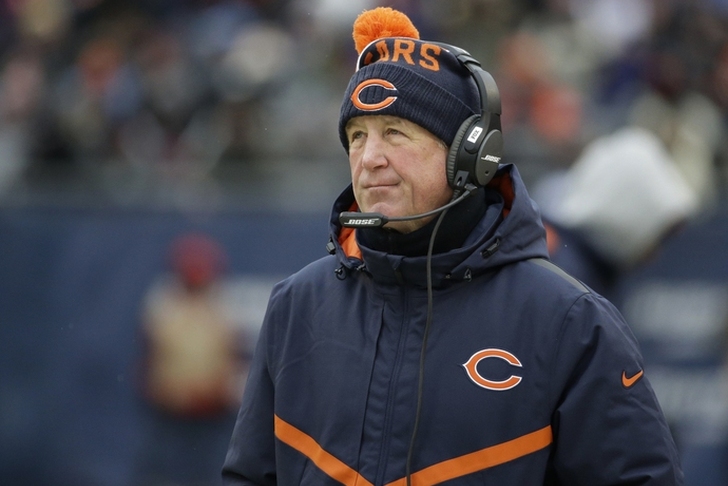 The Chicago Bears officially fired head coach John Fox on Monday following their Week 17 loss to the Vikings. The move ends Fox's tenure after three years, all last-place finishes. With Fox gone, the Bears will look to find a head coach who can help develop Mitchell Trubisky into a true franchise QB.

The Bears' search will be led by general manager Ryan Pace, who hired Fox in the first place. Expect Pace to target an offensive-minded coach to help Trubisky. If that's the case, the Bears could attempt to keep defensive coordinator Vic Fangio (whose contract is up) on the staff. Fangio might get a courtesy head coach interview, but he's likely not a serious candidate. With that in mind, here are the top 10 replacements for John Fox as Bears head coach.

10. John DeFilippo, Eagles QBs coach
We'll get to another Eagles coach later, but John DeFilippo will generate some head coaching buzz this offseason. It might be one year two early for DeFilippo to get a head coach gig, but I said the same thing about Sean McVay last year. DeFilippo has OC experience, although it came with the Browns. But he gets some credit for the play of Carson Wentz and in what is a down class of offensive-minded coaching options, keep an eye on DeFilippo and even Rams OC Matt LaFleur.

8. Matt Patricia, Patriots defensive coordinator
Entering the 2017 season, Patricia was one of the more coveted coaches. The Patriots defense struggled early on but has rebounded despite missing a few key players. The former rocket scientist has done a little bit of everything since joining the Patriots in 2004. He's served as an offensive assistant, offensive line coach, a linebackers coach, a safeties coach and took over as the defensive coordinator in 2012. The buzz around Patricia picked up last year and it should only grow. He's just 43 years old and he'll get a head coaching gig in the near future.

7. Jim Bob Cooter, Lions offensive coordinator
Cooter came to the Lions in 2014 as the teams' quarterbacks coach before he was promoted in Week 8 of the 2015 NFL season. Before he coached as an offensive assistant with the Denver Broncos and helped guide the Broncos offense to a 2013 Super Bowl appearance. Cooter is in his ninth NFL season and after a lackluster offensive performance from the Bears this season, he may be the new face they need calling the shots.

6. Frank Reich, Eagles offensive coordinator
Reich is one of the hottest names in the NFL right now given the success of the Eagles this season. Carson Wentz, in his second year, emerged as one of the best young quarterbacks in the league before his injury. Reich would likely help Trubisky continue his development. The Eagles' creative offense is a major reason why they have had success this season and the Titans could be looking for a fresh start. Reich will be connected to multiple jobs this offseason.

5. Pat Shurmur, Vikings offensive coordinator
The Vikings have been one of the surprise teams this season with a 12-3 record and in position to secure a playoff bye. The offense lost Teddy Bridgewater last season due to a horrific leg injury and Sam Bradford this season, but the coaching of Shurmur has reignited Case Keenum's career. Not many offensive coordinators would be able to lose two quarterbacks and still be successful, but Shurmur has found a way. Shurmur was the head coach of the Browns from 2011 to 2012 where things did not go well, but he has rehabbed his image in stints with Philadelphia and Minnesota.

4. Dennis Allen, Saints defensive coordinator
Allen is just 45 years old, but already has one head coaching stop, with the Oakland Raiders. While Allen only went 8-28 with the Raiders, he has started to rehab his stock. He's now the Saints' defensive coordinator and has helped turn that unit from a major weakness into a Top 10 squad this year. Allen has ties to Pace from the time they've both spent in New Orleans. While Allen isn't the offensive guy the Bears might target, don't be surprised if he gets a call.

3. Pete Carmichael Jr., Saints offensive coordinator
Expect Carmichael to at least get an interview. Much like Allen, Carmichael has a relationship with Pace from their time in New Orleans. While Sean Payton gets most of the credit for the Saints offense, Carmichael is a major part of the offense and has called the plays in the past. He's been the OC since 2009 and has been in the Big Easy since 2006. He's just 46 years old and could be a serious candidate for the Bears job.

2. Dave Toub, Chiefs special teams coordinator
Toub is one of the greatest special teams coaches in the history of the NFL. He has turned the Chiefs special teams into one of the most feared units, as he has at all of his previous stops. He is respected throughout the NFL and has a great relationship with the players and front office. At 55 years old, Toub is older than many first-time head coaches but will draw interest after having interviews last season. Toub would be a strong hire if the Bears nabbed a gifted and young OC to pair with him.

1. Josh McDaniels, Patriots offensive coordinator
McDaniels has rebuilt his reputation while leading the Patriots’ offense for the past five seasons after a less-than-successful head coaching debut in Denver. Its been rumored for several years that McDaniels has a strong desire to be an NFL head coach again should the right role open up. With a young QB in Trubisky already in Chicago, perhaps McDaniels will be intrigued by the job. He'll be at the top of nearly every team's list this year, but the guess here is he goes somewhere other than Chicago.