Three Hitmen players are about to age out of junior 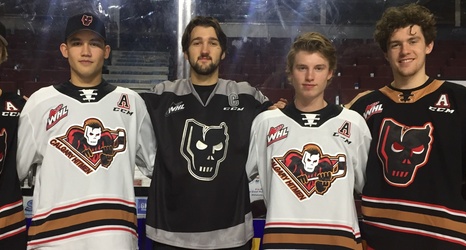 The 2019-20 regular season has been completed by the Calgary Hitmen, albeit with four fewer games than intended due to the coronavirus stoppage (and season cancellation). The playoff future of the team is unclear, but what we do know is three Hitmen players have played their final regular season contests in the WHL.

As per tradition, the three graduating 1999-born players – forwards Mark Kastelic and Kyle Olson, and defender Dakota Krebs – were to be named the three stars in the final home date of the season, this coming Sunday against Swift Current. In lieu of that, let’s honour them briefly here and then look ahead to the potential 20-year-olds for the 2020-21 campaign.