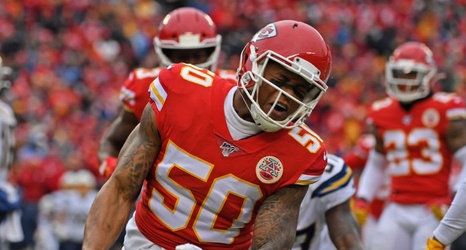 KANSAS CITY, MO - DECEMBER 29: Inside linebacker Darron Lee #50 of the Kansas City Chiefs reacts after making a tackle against the Los Angeles Chargers during the first half at Arrowhead Stadium on December 29, 2019 in Kansas City, Missouri. (Photo by Peter G. Aiken/Getty Images)

According to reports, the Buffalo Bills are adding to their linebacker position by signing free agent Darron Lee.

The depth at linebacker has been an issue and has been tested this season as starters Tremaine Edmunds and Matt Milano have both missed time. While Edmunds only missed one game, Milano has missed three of the first seven.