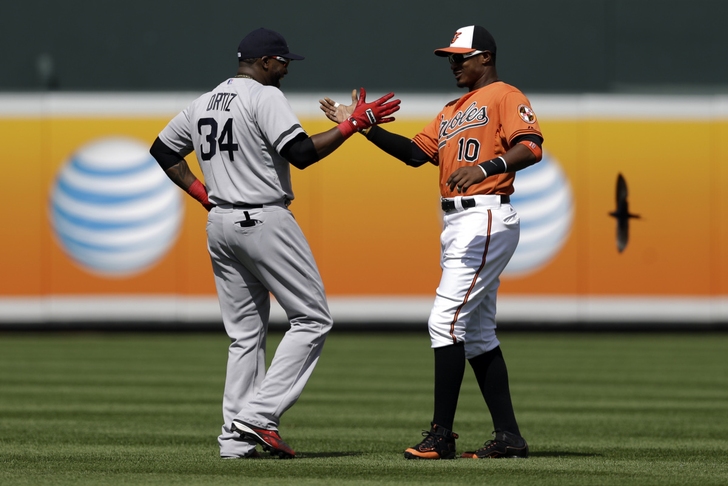 The Boston Red Sox and Baltimore Orioles face off in a three-game AL East matchup starting Monday night, and both teams will look to gain some ground on the division-leading Toronto Blue Jays.

Boston comes in as the streakiest team in baseball - before Sunday's win over Detroit, they had lost five in a row, and before that they had won seven...on the heels of a 10-game losing streak.

Baltimore will try to put an embarrassing series loss at the hands of the Oakland A's behind them, and they'll know that 3B Manny Machado could be headed for a suspension - his antics led to two bench-clearing altercations against the A's, and he'll no doubt be on a much shorter leash in this series...if he's around at all.

Dustin Pedroia is riding a 12-game hitting streak against the Orioles...and he's hit .472 over those 12.

Baltimore needs to quickly put their series against the A's in the rear-view mirror. Nick Markakis, Adam Jones and Nelson Cruz will need to be on point, since the Orioles won't be able to count on having Manny Machado around.

Baltimore's pitching will also need to improve, but their rotation matches up fairly well in this series - Bud Norris and Chris Tillman - who pitch Monday and Tuesday - have been hit or miss, but Wei-Yin Chen, who pitches the series finale, has excelled recently.

The Orioles also need to figure out what to do about the now-vacant closer role - Grant Balfour clearly isn't the man for the job right now, and until he gets his head straight (or the team finds a clear upgrade), the Orioles will be vulnerable at the end of games

No team in baseball alternates between hot and cold like the Red Sox, but recent history is in their favor - if the past month has been any indication, Boston does well when rebounding from a losing streak.

Boston's success in this series will come down to their pitching - Jake Peavy has struggled, Brandon Workman is still relatively untested, and Rubby De La Rosa is scheduled to start just his Major League game on Wednesday.

What to Watch for:

After facing two of baseball's best pitching staffs in Oakland and Detroit, both teams will look to rebound on offense against less dominant starters. Baltimore has a clear edge when it comes to pitching, and Boston will need to hope David Ortiz's three-run, ninth-inning HR against the Tigers on Sunday can breathe some life into their offense.

On paper, it looks like the Orioles should walk away with this one thanks to Boston's inconsistency...but Baltimore showed signs of fraying at the seams against Oakland on both offense and defense, and manager Buck Showalter will need to make sure the team stays focused and professional. With Grant Balfour out of the closer's role, the Orioles also need to make sure they have a way to protect leads once they establish them.

With both teams looking up at the streaking Blue Jays, this series is a great chance for one team to make a statement of intent in the AL East.

The Grady Sizemore experiment is coming to a close (BoSox Injection)