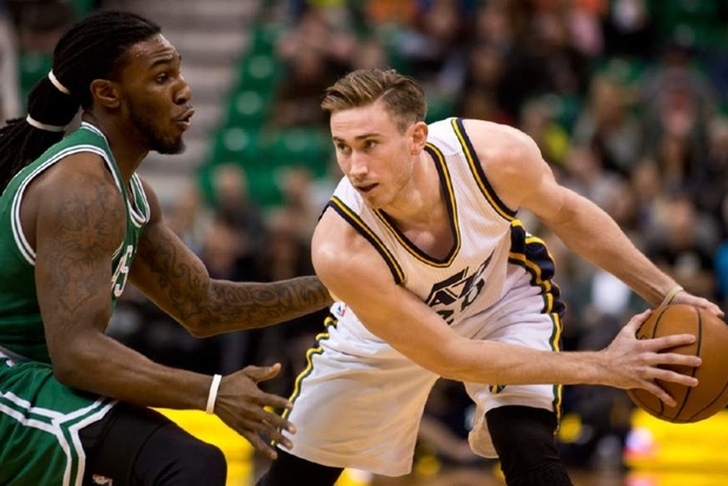 The Boston Celtics are working on trades that will give them enough cap space to complete the Gordon Hayward signing, but are also talking to the Utah Jazz about a possible sign-and-trade involving Hayward.

According to Mark Murphy of the Boston Herald, the two teams are "close" to reaching an agreement on that sign-and-trade.

The Celtics’ complex negotiations with the Utah Jazz, in an attempt to clear salary cap space and bring aboard Gordon Hayward, appears to be near completion. It could result in a sign-and-trade package that would send Celtics forward Jae Crowder to the Jazz.

Though the transaction is expected to involve more than a simple Hayward-for-Crowder swap – the Celtics want more for their valuable small forward than the services of a free agent they are going to get anyway – details of further assets were unclear.

A league source said this morning that Hayward, who has agreed to terms with the Celtics on a four-year, $128 million free agent contract, is in the process of traveling to Boston for an official announcement.

The Celtics also appear to be getting ready for an announcement. Team president Danny Ainge and head coach Brad Stevens both flew back to Boston this morning from summer league here.

Though all the pieces involved still remain unclear, Brian Robb of 98.5 The Sports Hub in Boston gave details of possible players and assets that could be involved.

Names that could be involved in a hypothetical sign-and-trade w/ Crowder (if picks aren't involved): Hood, Exum. If bigger deal, Favors. https://t.co/UAf6dclWLj

If Jazz are willing to give up a pick or two for Crowder, that could do the trick too with Utah sending no one out besides Hayward.

To clarify, Celtics won't get Hood unless they add assets to a potential deal beyond Crowder. For a Favors deal, C's would need to match $.

Whatever the deal is, it won't be for Utah to get back equal value in the deal for Hayward. The understand that he has opted for the Celtics and are willing conduct this sign-and-trade in order to get something in return while Boston sheds the cap space.

Ramona Shelburne and Adrian Wojnarowski of ESPN reported yesterday that the Celtics are open to trading Avery Bradley, Marcus Smart and Jae Crowder in order to create the needed cap space. Boston talked trade parameters with at least six teams on Wednesday, but this sign-and-trade with Utah appears to be what will get done..

Hayward averaged 21.9 points, 5.4 rebounds and 3.5 assists per game this past season.

Follow our Boston Celtics team page for all the latest Celtics rumors!