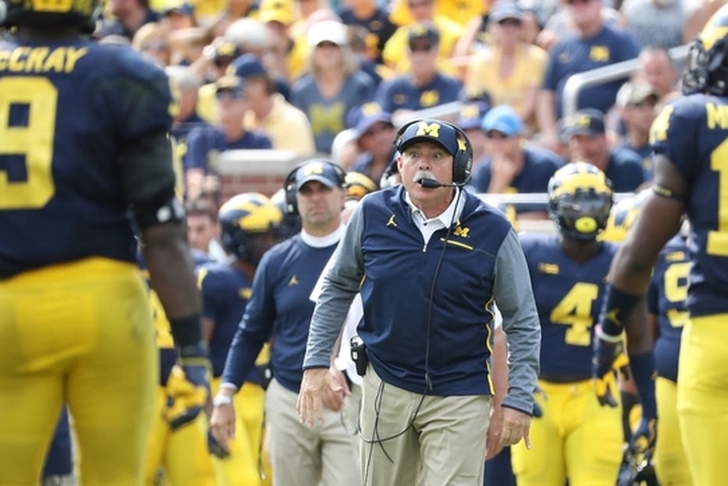 College football, the NCAA says, isn't about money. However, college coaches make a TON of money - and it's not just head coaches. 15 assistant coaches made over $1 million this past season as salaries continue to rise in order to keep the top coordinators from leaving for head coaching jobs elsewhere, and Big Ten teams pay their assistants as well as anyone. Here are the 10 coaches that are the highest-paid assistants in the Big Ten:

10) Garrick McGee, Illinois Fighting Illini - $650K
McGee has been Illinois' offensive coordinator for the past two seasons under Lovie Smith after spending two years in the position at Louisville. Prior to that, he was the head coach at UAB from 2012-13, going just 5-19 in those two seasons.

9) Joe Rudolph, Wisconsin Badgers - $654.8K
Rudolph is in his second stint with the Badgers, returning as Wisconsin's offensive coordinator in 2015 after being the tight ends coach from 2008-2011. He left to be the offensive coordinator at Pitt under Paul Chryst and served as the interim head coach in 2014 once Chryst left for Wisconsin before joining him in Madison.

8) Phil Parker, Iowa Hawkeyes - $675K
Parker has been on the Iowa coaching staff since 1999, serving as the defensive backs coach before being promoted to defensive coordinator in 2012.

7) Kirk Ciarrocca, Minnesota Golden Gophers - $700K
Ciarrocca followed head coach P.J. Fleck from Western Michigan - where he was for four years - to Minnesota. Prior to his tenure at WMU, Ciarroca was the co-offensive coordinator at Rutgers from 2008-2010.

NEXT READ: Here Were The Top 12 Highest-Paid College Football Coaches In 2017

6) Greg Schiano, Ohio State Buckeyes - $700K
Schiano has spent the past two seasons with the Buckeyes as Urban Meyer's defensive coordinator after failing with the Tampa Bay Buccaneers as a head coach, going 11-21 in two seasons. However, he did wonders for a Rutgers program that has fallen apart without him, going 68-67 in 11 seasons prior to that. He has received head coaching interest from several schools, namely Tennessee, but is still in Columbus.

5) Robb Smith, Minnesota Golden Gophers - $700K
Smith joined Fleck's staff as Minnesota's defensive coordinator after three seasons in the same role at Arkansas. He does have some NFL experience, serving as Tampa Bay's linebackers coach in 2013 with Schiano after spending four seasons at Rutgers (three under Schiano).

4) Bob Diaco, Nebraska Cornhuskers - $825K
Diaco was not retained by new Nebraska head coach Scott Frost after one season with the Huskers, which came following an unsuccessful (11-26) three-year stint as UConn's head coach. Prior to that, he had great success as Notre Dame's defensive coordinator from 2010-2013.

3) Pep Hamilton, Michigan Wolverines - $1.15 million
Hamilton spent the last season as Michigan's assistant head coach and passing game coordinator after spending four seasons as an offensive coordinator in the NFL with the Indianapolis Colts and Cleveland Browns. He was with Jim Harbaugh and David Shaw at Stanford prior to do that, and there's a chance he could move on after Michigan's bowl game.

2) Tim Drevno, Michigan Wolverines - $1.15 million
Drevno has been Michigan's offensive coordinator since Harbaugh took over in 2015 after working for him at San Diego, Stanford, and with the San Francisco 49ers.

1) Don Brown, Michigan Wolverines - $1.3 million
The third member of the Michigan coaching staff on this list, Brown is one of the most well-respected defensive coordinators in the country. He's one of the Wolverines' best recruiters and is why they've had an elite defense for the past three seasons.

Follow our NCAA page for all the latest College Football news or download the Chat Sports App!