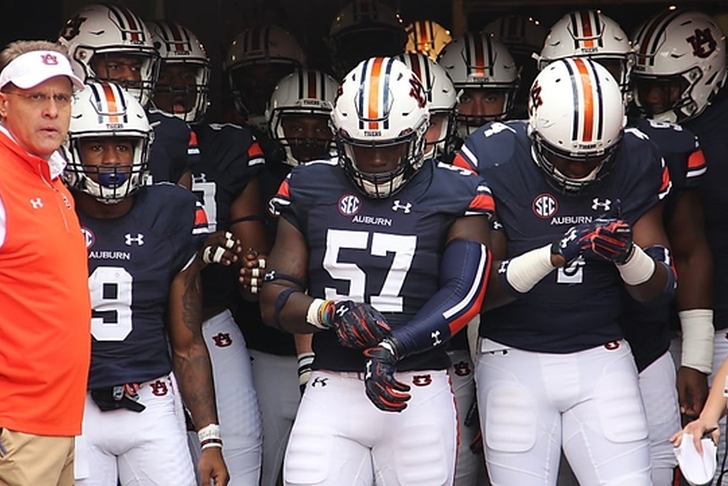 The Auburn Tigers finished the season with a 10-4 record, losing to UCF in the CHICK-FIL-A Peach Bowl 34-27. With quarterback Jarrett Stidham returning, the Auburn passing attack should improve. The Tigers have a solid recruiting class entering 2018 with 16 four-star recruits and will look to win the SEC West again. Here's how they rank in the way-too-early top 25 polls published by major publications:

Chat Sports
Ranking: 9th
Breakdown: "Auburn's late-season success - which including wins over Alabama and Georgia - showed what the Tigers can be when quarterback Jarrett Stidham is playing his best. The defense will be great again in 2018, and if Stidham can start playing with more consistency, they'll be a College Football Playoff threat next season."

USA TODAY
Ranking: 13th
Breakdown: "Auburn already has been dinged by losses to the NFL, though retaining quarterback Jarrett Stidham is a huge development. An issue is the Tigers’ schedule, which includes first-half dates with Washington, LSU and Mississippi State, and road games in November against Georgia and Alabama."

ESPN
Ranking: 12th
Breakdown: "What an aggravating season for the Tigers, who twice beat the No. 1-ranked team in the country and then watched those teams (Alabama and Georgia) play for the CFP National Championship on Monday night. Auburn's resurgence was enough to land coach Gus Malzahn a seven-year contract extension after Arkansas tried to hire him as its new coach. The Tigers will miss Johnson, who ran for 1,391 yards and 18 touchdowns this past season, and Pettway, who also is turning pro. They'll also have to replace four of five starters on the offensive line. With quarterback Jarrett Stidham returning, along with most of his top wideouts, the Tigers should have a potent passing game. On the other side of the ball, defensive coordinator Kevin Steele has built one of the better units in the SEC, but they'll miss Holland's pass-rushing skills and Davis' coverage skills."

Sporting News:
Ranking: 8th
Breakdown: "Gus Malzhan opted to stay at Auburn, and with good reason. There's enough talent on both sides of the ball to repeat as SEC West champions, and perhaps finish the job this time around. Jarrett Stidham is back, but leading rushers Kerryon Johnson and Kamryn Pettway are gone and the defense loses Jeff Holland and Carlton Davis to the NFL. The Tigers do have to travel to Tuscaloosa and Athens this time around."

CBS
Ranking: 15th
Breakdown: "Gus Malzahn has a new contract and gets his quarterback (Jarrett Stidham) back. Gus will have to find replacements for tailback foundations Kerryon Johnson and Kamryn Pettway. "

Athlon Sports
Ranking: 9th
Breakdown: "Auburn ended Alabama’s three-year run at the top of the SEC West in 2017. Can coach Gus Malzahn’s team make it two in a row? This team has enough to knock off the Crimson Tide once again, but trips to Mississippi State, Georgia and Alabama form a challenging road slate. Additionally, the opener against Washington won’t be easy. Quarterback Jarrett Stidham returns after an impressive debut, and the passing game should thrive with the return of the top five pass catchers from 2017, including Ryan Davis (76 catches) and Darius Slayton (23.9 ypc). Running back Kerryon Johnson earned SEC Offensive Player of the Year honors by Athlon Sports but decided to leave early for the NFL. With Johnson off to the next level, Kam Martin, Malik Miller, Devan Barrett and incoming freshman Asa Martin will compete for carries. Malzahn’s biggest concern rests up front. The Tigers lose All-America guard Braden Smith, while center Casey Dunn and tackles Austin Golson and Darius James expire their eligibility. Auburn's defense suffered a setback when cornerback Carlton Davis and edge rusher Jeff Holland left for the NFL. Even though Davis and Holland are big losses, this defense should still have enough talent to rank among the best in the SEC. Look for juniors Marlon Davidson and Derrick Brown to emerge as one of the SEC’s best defensive linemen next fall."

Yahoo Sports
Ranking:9th
Breakdown: "QB Jarrett Stidham said he was coming back to the Tigers, though given the loaded quarterback draft class already it’s not much of a surprise. The run game will depend on Kam Martin after the departures of Kerryon Johnson and Kamryn Pettway to the NFL. But all of Auburn’s wide receivers are back for another season with Stidham and the defense should be good once again. Auburn is poised to be the top challenger to Alabama again."

Sports Illustrated
Ranking: 5th
Breakdown: "Quarterback Jarrett Stidham is returning for his senior season, and after Auburn’s wins over 2017’s No. 1 and No. 2 teams, there’s no doubt the Tigers are for real. Keeping coach Gus Malzahn from bolting for Arkansas helps, but they’ll still have to replace key contributors in the running game and on defense."