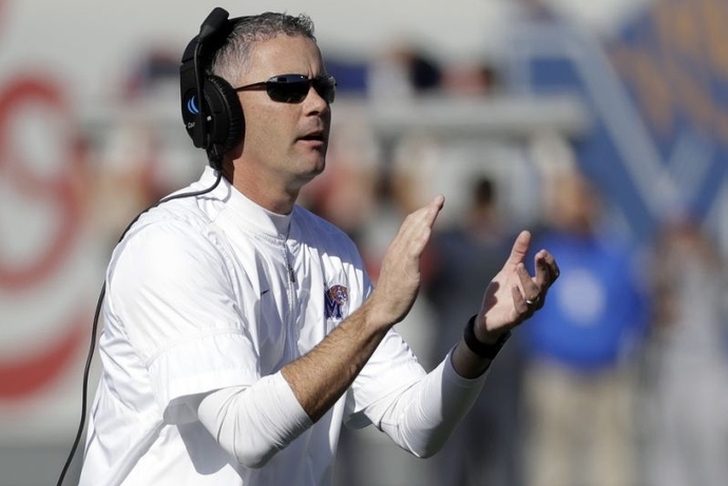 The Arkansas Razorbacks have had a relatively quiet coaching search since firing head coach Bret Bielema following the conclusion of the regular season. However, they have identified a number of top candidates and could have the search wrapped up in the coming days. Here are all the latest news & rumors you need to know from the search:

Gus Malzahn spurns Arkansas
Auburn head coach Gus Malzahn had been linked to the Arkansas head coaching job since he played for the Razorbacks, was a very successful high school head coach in the state, and got his collegiate coaching career started at the school, but has signed a new deal to stay with the Tigers.

Following their loss in the SEC Championship Game, he shot down the notion of him returning to his alma mater.

Mike Norvell is Arkansas' backup option
With Malzahn now out of the picture, Arkansas plans to turn their attention to their No. 2 option in Memphis' Mike Norvell, according to Trent Shadid of SEC Country.

If Arkansas is unable to lure Malzahn to Fayetteville, the source said the Razorbacks will immediately shift focus to Memphis coach Mike Norvell. Memphis lost to Central Florida, 62-55 in double overtime, in the American Athletic Conference title game Saturday afternoon.

Just 36 years old, Norvell left his offensive coordinator position at Arizona State to take over the Memphis head coaching gig last year. After an 8-5 season in year one, the offensive-minded Norvell has guided one of the most electric offenses in the nation - something Arkansas could use. The Tigers are 10-2, with their lone losses coming to undefeated UCF.

Bret Bielema buyout
Bielema's buyout has finally been settled, with the school agreeing to pay him $11.8 million, according to an ESPN report. That number is lower than the $15.4 million he had remaining on his contract.

Bielema posted a 29-34 record in five seasons with a Razorbacks, including a measly 11-29 mark in SEC play. He never won more than eight games in a season and only had a winning conference record one time.