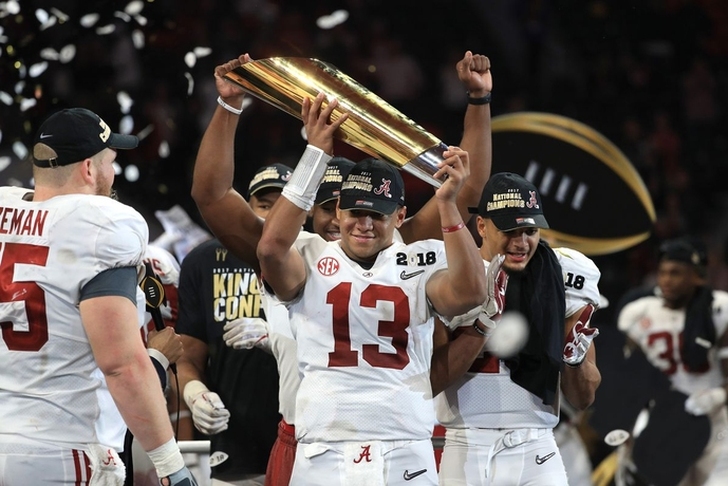 Another year, another national championship for the Alabama Crimson Tide. Alabama and head coach Nick Saban made the bold decision to turn to true freshman Tua Tagovailoa to start the second half and it paid off in a thrilling comeback OT victory. Alabama is once again the favorite to win the national title based on the early preseason polls, but they aren't No. 1 for every publication. Here's how they rank in the way-too-early top 25 polls published by major publications.

Chat Sports
Ranking: 1st
Breakdown: "Surprise, surprise. All the Tide do is reload - and they really don't have to do that much of it next year. Championship game hero Tua Tagovailoa figures to have full control of the starting quarterback job in 2018 and he will be joined in the backfield again by Najee Harris and potentially Bo Scarbrough and Damien Harris. The big changes will come on the defensive side of the ball, but we've seen this team re-tool time and time again. They deserve this ranking."

USA TODAY
Ranking: 2nd
Breakdown: "The Tide are set to rebuild following an inevitable exodus of talent to the NFL draft. Check that: Alabama’s set to reload. While the cast changes, some constants will remain. One is the continued excellence of a defense due to find another one or two national names. Another is a physical offense that may hit on an offseason quarterback controversy but perhaps be better for it — either Jalen Hurts will take a step forward or sophomore-to-be Tua Tagovailoa will step in."

ESPN
Ranking: 1st
Breakdown: "The 2017 version of the Alabama dynasty probably wasn't as talented and might not have as many future NFL stars as the previous ones. But the Crimson Tide reached the CFP National Championship for the third straight season, and they'll be equally good next season as Nick Saban's "Process" continues. The biggest question mark for the Tide heading into the offseason is who will start at quarterback. Jalen Hurts was benched at halftime and rising sophomore Tua Tagovailoa should be the favorite after his second-half performance against Georgia. Whoever starts at quarterback might have to find new offensive weapons if leading rusher Damien Harris and leading receiver Calvin Ridley turn pro. The Tide will lose some key players on defense, including Evans and the entire starting secondary if juniors Minkah Fitzpatrick and Ronnie Harrison leave early, but there are capable replacements waiting in the wings. Look for players such as running back Najee Harris, receiver Jerry Jeudy and linebackers Dylan Moses and Mack Wilson to emerge as key contributors this spring. The Crimson Tide will also have a new defensive coordinator after Jeremy Pruitt was named Tennessee's new coach."

Sporting News:
Ranking: 1st
Breakdown: "Yes, we put Alabama at No. 1 again. Chances are it will be atop the preseason polls that come out in August. Nick Saban may have a QB controversy between Jalen Hurts and Tua Tagovailoa, but he's working with the same talented stable of skill position players. One possible concern: Saban will be working with his third different defensive coordinator in four seasons."

CBS
Ranking: 1st
Breakdown: "You know the defense is going to be stout. The only possible loss at tailback is Damien Harris. Year 3 of Jalen Hurts ... or Year 1.1 of Tua Tagovailoa? Yes, we're suggesting a CFP rematch with Georgia and/or Clemson for the defending champions."

Athlon Sports
Ranking: 1st
Breakdown: "Nick Saban’s team will lose a handful of key contributors from its 2017 team, but this program is still one of the favorites to win it all and tops Athlon's early college football rankings for 2018. The offense will be led by quarterback Jalen Hurts, and an offensive line that’s expected to return four starters. Left tackle Jonah Williams and guard Ross Pierschbacher will be among the SEC’s top returning linemen, but center Bradley Bozeman must be replaced. The skill positions could take a hit in early entrants to the NFL Draft. Receiver Calvin Ridley and running backs Damien Harris and Bo Scarbrough are all candidates to make the jump. Alabama’s defense will have a new play-caller after Jeremy Pruitt left to take the top spot at Tennessee. However, don’t expect the standard of performance to change much on the Crimson Tide defense. End Da’Shawn Hand, linebackers Rashaan Evans and Shaun Dion Hamilton and defensive backs Tony Brown, Minkah Fitzpatrick and Levi Wallace must be replaced. This unit could lose a couple of players early to the NFL. But as expected in Tuscaloosa, the next wave of stars is ready to step up. Lineman Raekwon Davis and linebackers Mack Wilson and Dylan Moses are the leaders for the defense next fall. Former LSU cornerback and junior college recruit Saivion Smith is expected to play a major role in the secondary. The Crimson Tide also have a favorable crossover schedule in SEC play (no Georgia) and its toughest road date is at LSU on Nov. 3. Auburn has to come to Tuscaloosa next season. One potential wild card storyline: Will Tua Tagovailoa push Hurts for snaps at quarterback this offseason?"
*NOTE*: Athlon published their list before the National Title game, hence the mentions of Jalen Hurts.

Yahoo Sports
Ranking: 1st
Breakdown: "Another surprise! Another all-SEC title game and an Alabama-Georgia rematch will not go over well in much of the country. But we’re saying there’s a chance. Alabama will have turnover, especially in the defensive secondary, but we all know how well Nick Saban’s teams reload year after year. A possible QB controversy between Jalen Hurts and Tua Tagovailoa looms and we’re guessing either Damien Harris or Bo Scarbrough will return for a senior season while wide receiver Jerry Jeudy should take a step forward. But the national champions should start the next season where they ended this one."

Sports Illustrated
Ranking: 2nd
Breakdown: "Speaking of true freshman QBs, Tua Tagovailoa looks like he’s going to be a problem. Was Monday night’s title game a warning shot to the entire nation for next fall and beyond? What Nick Saban's program did in this year’s playoff reinforces that the Tide are never to be counted out."