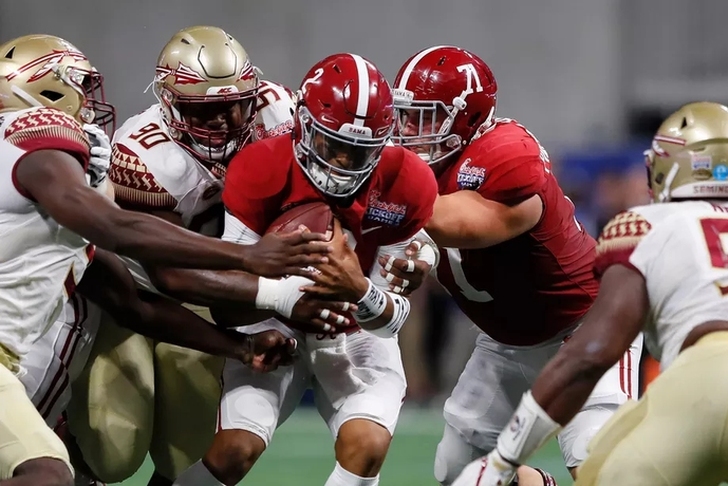 As has become tradition on college football's opening weekend, we were given the answer to a question we really should stop asking.

Yes, Alabama really can replace all those guys they lost to the NFL. And yes, they're just as good as they were last year.

Alabama's defense elevated their play in the second half and stifled Florida State, carrying the Crimson Tide to a hard-fought 24-7 win over the Seminoles.

They limited FSU to just 65 yards in the second half and forced a series of demoralizing turnovers that really put the game away. On four straight possessions, the 'Noles had a punt blocked, fumbled a kickoff and intercepted two passes.

Damien Harris (@DHx34) flies in to block the punt for Alabama! #FSUvsBAMA pic.twitter.com/ImUFTaYDxt

After trailing 7-3, Hurts found wideout Calvin Ridley on a 53-yard bomb to give Alabama the lead for good, and Harris added some insurance later in the game.

Hurts finished the game just 96 yards passing, but didn't turn it over and rushed for another 55 yards. Ridley caught seven passes for 83 yards and that touchdown, while Harris led Alabama's rushers with 61 yards on just seven carries.

Deondre Francois had a solid game throwing the ball for Florida State outside of those two interceptions (210 yards, TD) before leaving with an injury, yet the Seminoles failed to establish anything on the ground. The Tide limited them to just 34 rushing yards as a team.

Auden Tate (@lil_t8te) comes up with the acrobatic catch in the end zone to give #FSU the lead! #FSUvsBAMA pic.twitter.com/D5h3wSdKOW

Florida State returns home to take on UL-Monroe next weekend, while Alabama will host Fresno State.