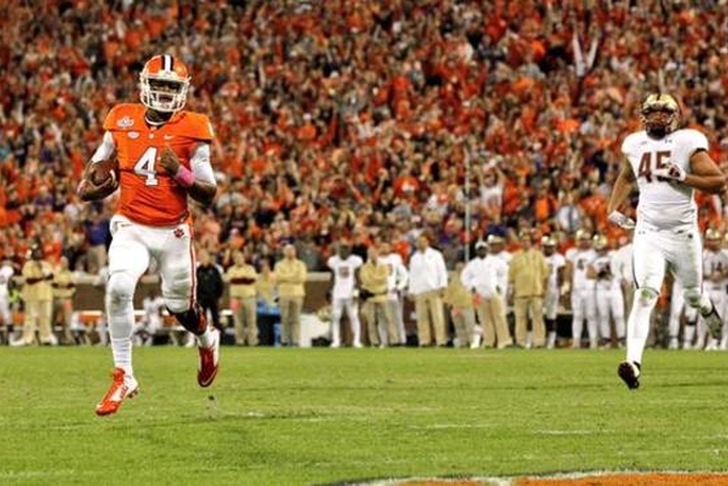 After a promising start to the season, Boston College dropped to 0-4 in conference play following their loss to Clemson. Their atrocious offense has been the biggest reason why as they've scored just 26 points in their four ACC games.

Losses to Syracuse and Indiana aren't good for anyone's resume, especially when your three wins are over Elon, Army, and a 3-0 barnburner over BC.

Virginia did get a conference victory over Syracuse in three overtimes last weekend, but that was more of a fluke than an indication about this team being better. They need to make a bowl game for head coach Mike London to keep his job, and that just isn't happening.

This was supposed to be a season in which Georgia Tech competed for an ACC title. Instead the Yellow Jackets are reeling, with five straight losses and sit dead last in the ACC Coastal Division without a conference win. At this point, Georgia Tech needs to string together wins just to make a bowl game.

The Wolfpack started the season 4-0 against cupcakes Troy, Eastern Kentucky, Old Dominion, and South Alabama, but are 0-2 in ACC play with losses Louisville and Virginia Tech. Right now, it doesn't look like this team is very good.

Louisville is on the rise after beating NC State and hanging tough against Florida State, but they're still only 2-4 this season and 1-2 in conference play.

Syracuse's loss to Virginia was awful, but they've shown flashes of being a productive team. They'll get their chance to prove it this weekend against Pitt.

The Hokies aren't the program they used to be, but Frank Beamer's squad is still a viable threat in the ACC. They are just 3-4 and 1-2 in conference, but they get quarterback Michael Brewer back this week from a shoulder injury he suffered in their season-opening loss to Ohio State.

Miami is 4-2 on the year with losses to Cincinnati and Florida State, and nothing really impressive in their resume other than not losing a ton. They'll get their chance to add a big win Saturday at Clemson.

UNC's season-opening loss to South Carolina hurts, but they've rebounded to win five straight games and has their offense humming as well as anyone in the country.

Pitt finds themselves ranked in the top 25 for the first time in a long while thanks to a 3-0 conference record with consecutive victories over Virginia Tech, Virginia, and Georgia Tech.

Duke is in poll position in the ACC Coastal again because they just don't beat themselves. After losing at home to Northwestern, they beat Georgia Tech and Boston College before dismantling Army this past weekend. The Blue Devils have another test this week on the road against Virginia Tech.

Florida State's defense has been strong this season, and their offense is starting to come around, showing they clearly belong in a category with Clemson above the other teams in the conference. Their showdown at Clemson on Nov. 7 will decide who wins the Atlantic Division and probably the conferece as a whole.

Clemson took care of business against Boston College with the 34-17 win, keeping them among the ranks of the unbeaten. Now they're ranked No. 6 in the country and have an extremely easy schedule the rest of the season, paving the way for a chance to play in the playoff. The defense is vastly improved and one of the best in the country, and the offense is capable of scoring a touchdown from anywhere on the field.