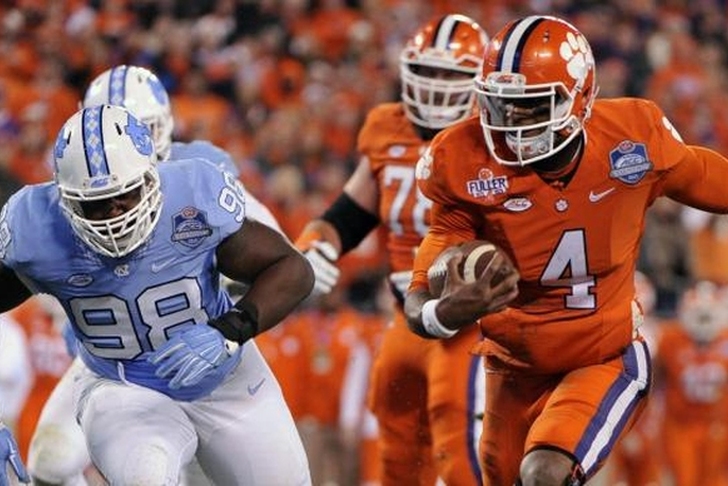 It's bowl season, which means we've got a full slate of ACC bowl games to look forward to as December segues into January. We're here to break down all of the conference-affiliated matchups announced on Sunday.

Miami is looking to end an up-and-down season on a high note, but they'll have to slow down Washington State's high-powered passing attack lead by head coach Mike Leach.

Duke ended their season with one win over their last five games, but a trip to New York to take on the 6-6 Hoosiers could give the Blue Devils their first bowl victory since 1961.

Virginia Tech will look to send head coach Frank Beamer out in style, who is retiring after 28 years at the position.

Pitt has to face Navy in the Midshipmen's home stadium, and they'll have to slow down Navy's triple-option attack headlined by quarterback Keenan Reynolds, who broke the NCAA record for career touchdowns this season.

In one of the premier non-New Year's Six bowl games, this top-20 matchup features two of the highest scoring offenses in the country. Baylor's quarterback position will be a major question mark as they were forced to play a wideout at the position due to injuries to all of their QB's on the roster.

There should be a lot of scoring in this matchup between two spread offenses, headlined by two underrated quarterbacks in Jacoby Brissett and Dak Prescott.

Both teams have been inconsistent all season, but it will be fun to watch Texas A&M's pass-happy spread system go up against Louisville's talent secondary.

FSU closed their season strong with a win over Florida, and they want to send their season on yet another high note by beating Houston, who won the Group of 5's automatic bid into a New Year's Six bowl.

There will be plenty of intensity with a berth in the national championship game on the line, but Oklahoma is also looking for revenge for their 40-6 loss to Clemson in the Russell Athletic Bowl last year. Two Heisman contending quarterbacks in Deshaun Watson and Baker Mayfield will also make this one extremely entertaining.