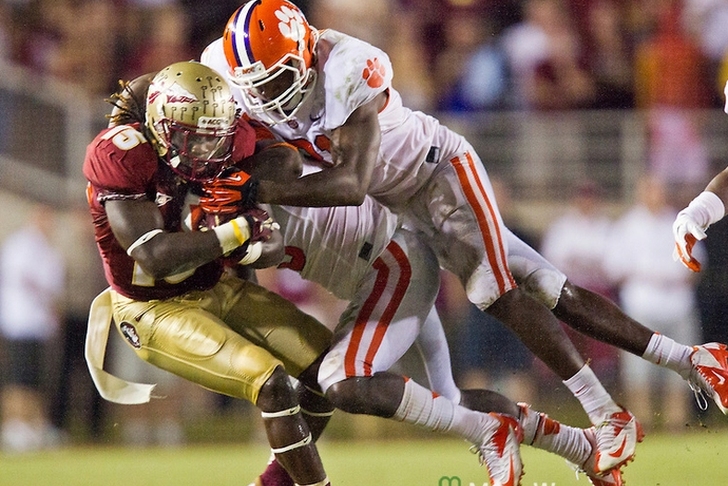 ACC football is back, and we're here to ensure you get maximum couch time during the conference's biggest games of the 2015 regular season. Here's our list of The 4 Best Games In ACC Football In 2015.

What a fun Thursday night game for us to get early in the season. Clemson's schedule takes a sharp left turn following opening cupcakes against Wofford and Appalachian State when they travel to one of college football's underrated venues to face the rival Cardinals. On the other side, Louisville will be battle tested after games against Auburn and Houston. Could Clemson's CFP hopes take a hit in this ESPN showcase against a quick step-up in competition?

The first of two HUGE October 10th games in the conference, Miami hasn't had this good of a shot to beat Florida State since the turn of the decade. Miami has lost five straight in the ACC's premier rivalry game (or that's how it's billed), but rising sophomore quarterback Brad Kaaya could change all that against a Jameis-less Seminoles team with the game of a lifetime in Tallahassee.

Here's an opportunity for payback if you're Clemson. The Jackets streaked away from the Tigers in last year's matchup after Deshaun Watson got hurt, keeping with a trend in the series by making it nine home wins in ten games for the two teams. Watson is back and ready to go after ending his 2014 season on the turf in Atlanta. A win here for Clemson sets them up nicely for a schedule crunch over the last several weeks.

No pressure here, right? The winner of this game has gone on to play for the ACC Championship the past FIVE YEARS, and could easily be six straight in 2015. Clemson has defeated the Noles five times in their last six meetings in Death Valley. Is it any wonder why the ACC moved this game to a marquee slot in November to maximize exposure as the College Football Playoff talk heats up around the nation.