Xavier defeats Providence by a final of 64-58 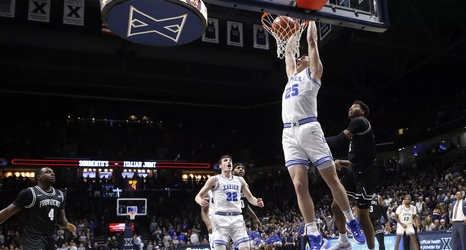 With 8:59 to play in the game, Providence's Alpha Diallo (14/6/3, 5 TO) - a 56% free throw shooter coming into the day - was wrapping up a minute in which he had gone 4-4 from the line and putting the Friars up 50-47. In a game where the lead had changed hands like a hot potato and neither team could find breathing room, Diallo's FTs and Providence's subsequent defensive stop felt like a potential turning point.

The game had been a scrappy affair the whole way through. Tyrique Jones (14/18/4) failed to win the tip for the first time in forever, and Providence had a 2-0 lead through Nate Watson (16/7/0) before X ever touched the ball.