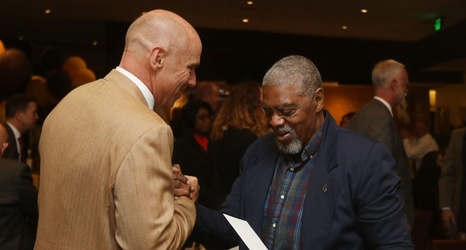 LARAMIE — Since Oct. 17, 1969 — the day 14 black football players were dismissed from the University of Wyoming’s football team for wanting to protest racial injustice — no one has publicly apologized on behalf of the school for the incident that altered the lives of a group more commonly known as the Black 14.

The Black 14 received a formal apology from the university during a dinner in the Wildcatter Stadium Club and Suites at War Memorial Stadium. Eight of the 11 living members are back on Wyoming’s campus as part of a weeklong 50th-year commemoration of the event ahead of the Cowboys’ game Saturday against Idaho, where the group will be honored at halftime.