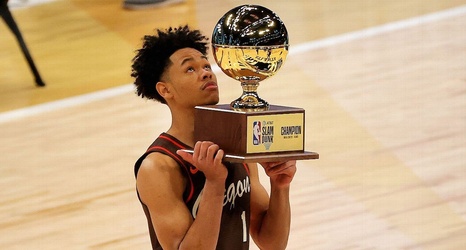 Portland's Anfernee Simons was all smiles as he became the first Trail Blazers player to win the NBA dunk contest, which took place during halftime of Sunday night's All-Star Game in Atlanta.

Simons bested rookies Obi Toppin of the New York Knicks and Cassius Stanley of the Indiana Pacers to bring home the trophy, which Simons called "a dream come true."

Simons won the contest over Toppin in the final round via a new rule called the "Judge's choice." Simons and Toppin had one dunk each in the round, and instead of a score, the five judges selected a name, with Simons receiving three votes to Toppin's two.