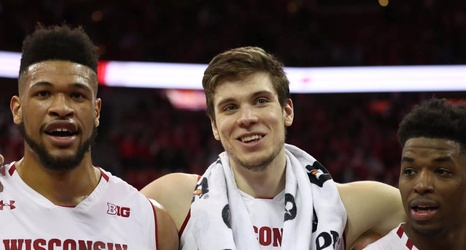 After a 2-0 finish to the regular season, the Wisconsin Badgers men’s basketball team has jumped up to No. 19 in the latest AP Top 25 poll that dropped Monday morning.

Wisconsin (22-9 overall, 14-6 Big Ten) pounded a hapless, hopeless and coach-less Iowa Hawkeyes team on Thursday during Senior Night at the Kohl Center and then escaped Columbus, Ohio with an overtime victory against a desperate Ohio State squad that still has not won a game during star center Kaleb Wesson’s suspension.

The Badgers needed to win the game against the Buckeyes in order to secure the fourth seed in the conference tournament and the coveted double-bye and, despite blowing a 23-point second half lead, they showed their mettle in the must-win game.