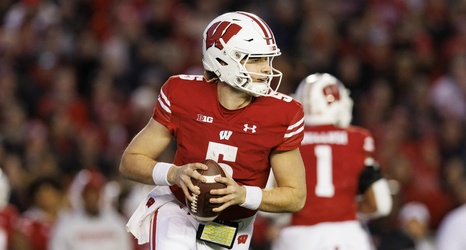 The Badgers will have a new starting quarterback under Luke Fickell. On Sunday afternoon, Graham Mertz announced that he will be entering the transfer portal.

Fickell spoke with Mertz before the announcement: “We want nothing more than the best for him. I encouraged him to stick around here and see how the changes go.”

It’s been a very up-and-down couple of years for Mertz as QB 1 in Madison. He enrolled as Wisconsin’s highest-rated quarterback prospect of all time, fresh off of an MVP performance in the All-American Bowl.

Mertz raised the bar even higher after throwing for five touchdowns in his first career start versus Illinois in the 2020 season opener.