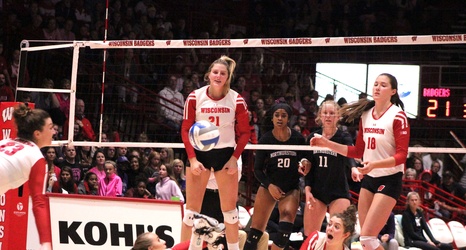 For the first time in Head Coach Kelly Sheffield’s seven years at the University of Wisconsin, the No. 6 UW volleyball team (12-4, 8-0 Big Ten) has won eight straight games. Ironically, the run comes after a 4-4 start to the season — his worst start to a season at Wisconsin.

The Badgers took out the No. 17 Illinois Fighting Illini (9-8, 4-4 Big Ten) in a five-set thriller Friday night before sweeping Northwestern (9-11, 0-8 Big Ten) the following night.

The Illini ended Wisconsin’s run in the NCAA Tournament last season in the Elite Eight.

This time, the Badgers did enough to overcome the Illini in five sets.