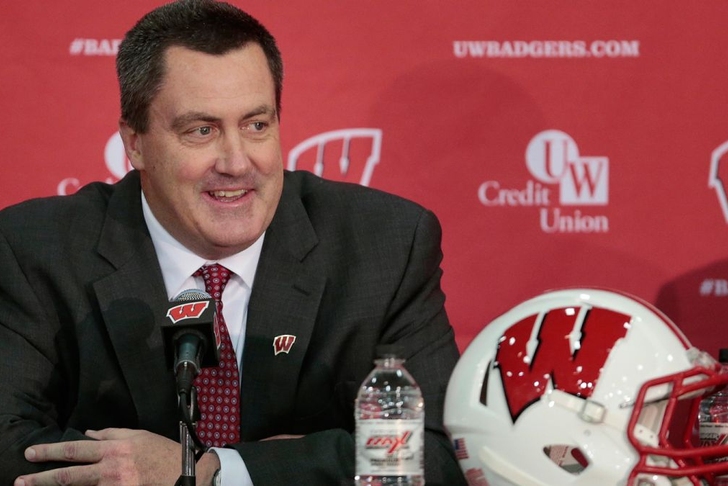 New Wisconsin Badgers head coach Paul Chryst is already putting his imprint on the program, directing recruiting as the team looks to reload for the 2015 NFL season and beyond. Who's on top of Chryst's wishlist? What else does the recruiting trail have in store for the Badgers? All this and more in our Wisconsin Football Recruiting: Rumors Roundup For Sunday 1/11.

We were tipped off Saturday afternoon head coach Paul Chryst is looking to bring in two more quarterbacks with Austin Kafentzis and that one of those quarterbacks would be Pittsburgh commit Alex Hornibrook.

The three-star Pittsburgh commit has reportedly been looking into admissions at Wisconsin in hopes of flipping his commitment to the Badgers to join his former recruiter. The other QB on Chryst's docket might be a transfer, with former Houston quarterback John O'Korn listed as having had contact with Wisconsin.

Three-star defensive tackle Elu Aydon is still a Wisconsin commit, but Badger247 cites a source that indicates the Oregon State Beavers are confident about getting him to flip and head to the Pacific Northwest.

Aydon committed to the Badgers in October, but Gary Andersen's departure for the Beavers has said to (at the very least) have piqued his interest.

Chryst being honest with Kafentzis

2015 three-star quarterback Austin Kafentzis has been kept in the loop about Paul Chryst's plans to open up the QB competition with some new faces, and Kafentzis is fine with the challenge as long as he's given a shot to compete for the job.

In fact, 247Sports reports that Kafentzis has worked diligently to keep Wisconsin's recruiting class Madison-bound, calling commits such as three-star defensive end Nate Howard and urging them to stay on their current course.

Follow our Wisconsin Badgers team page for the latest from the world of Wisconsin football recruiting!