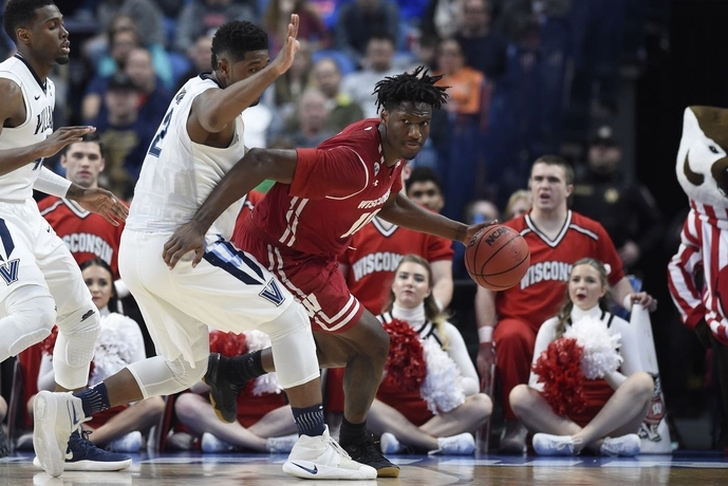 College basketball will not have a repeat national champion.

The Wisconsin Badgers made sure of that on Saturday, knocking out top overall seed Villanova with a 65-62 victory.

Bronson Koenig (17 points) hit a pair of huge three-pointers down the stretch and Nigel Hayes (19 points) added a late layup that helped cap Wisconsin's comeback and ice the game. With the win, Wisconsin advances to the Sweet 16 for the fourth straight season.

Wisconsin led for the first 25 minutes of the game, but foul trouble to Koenig and center Ethan Happ killed their momentum. Villanova used that to their advantage, going on a spirited run that gave them a 57-50 lead with just over five minutes to play.

Jalen Brunson (@jalenbrunson1) gets the acrobatic layup to go...AND THE FOUL! #MarchMadness pic.twitter.com/g33AVWDfTj

Of course, Wisconsin had one last spurt in them, closing the game on a 15-5 run to pull off the upset of the tournament. The winning play came from Hayes, who made this layup with just over 11 seconds to play.

Hayes finished with 19 points and eight rebounds for the Badgers, and played excellent defense down the stretch on Villanova star Josh Hart. Happ also played well with 12 points and seven rebounds.

Hart led the way for Villanova with 19 points, while Donte DiVincenzo contributed 15 points and five rebounds off the bench. The Wildcats have now lost in the Round of 32 in three of the last four years.

Wisconsin will now play the winner of (4) Florida/(5) Virginia in the Sweet 16 at Madison Square Garden on Friday.