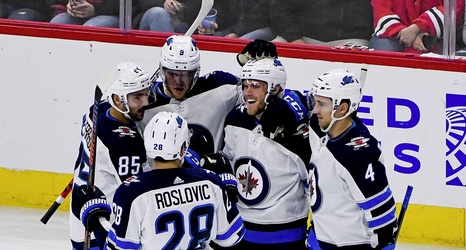 Winnipeg Jets left wing Nikolaj Ehlers, second from right, celebrates with teammates after scoring a goal during the second period of an NHL hockey game against the Chicago Blackhawks Saturday, Oct. 12, 2019, in Chicago.

The Jets had trailed 2-1 until about 12 minutes into the third period when Andrew Copp evened the contest. Kyle Connor worked the puck to the front of the net, drew the attention two Blackhawks and dished to Copp, who promptly stuffed it behind Lehner with just 8:16 left in regulation time.