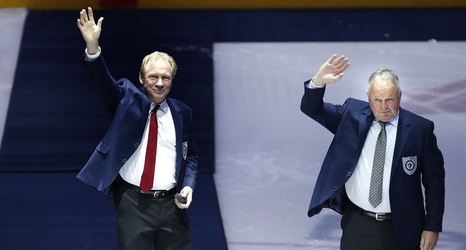 Thomas Steen and Randy Carlyle were honoured by the Winnipeg Jets Hall of Fame prior to the Jets game against the New York Rangers in Winnipeg on Tuesday.

Thomas Steen’s favourite story about Randy Carlyle actually involves a racehorse, not a hockey game. Turns out the man known as "Kitty" owned a few ponies back in the day, and Steen recalls a memorable pit stop during a Winnipeg Jets road trip.

"He had this one horse, Famous Lemon (Len, actually, but everyone called him Lemon). We had a van pick us up at the airport when we were playing Detroit and it took us to the race track and we had dinner there, the bunch of us.