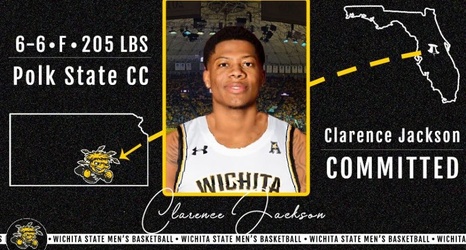 Wichita State landed its fifth commitment of the spring recruiting period as junior college wing Clarence Jackson announced his intentions to become a Shocker on Monday. Jackson, a 6’6 wing out of Polk State College, became the second junior college to commit to WSU in as many days.

Coming out of high school, Jackson decided to attend junior college before making the transition to the Division-I level and excelled in his two seasons there. This past season, Jackson averaged 13.3 points and 8.2 rebounds per game while shooting 50.7% from the field.

Jackson is unranked by the main junior college ranking system, Juco Recruiting, but Verbal Commits has him as a two-star prospect.