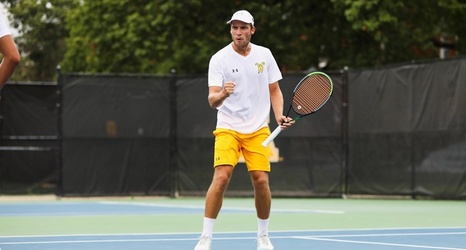 KANSAS CITY, Mo. – The Wichita State men's tennis team swept a double header Tuesday to improve to 7-3 as they defeated Creighton 5-1, and UMKC 5-1, at the Woodside Health and Tennis Club in Kansas City.

The Shockers will get a nice break before their next match on February 14, at 6 p.m. against Drake in Des Moines, Iowa.

Match 1 | Creighton
The Shockers shook things up in doubles with the absence of Murkel Dellien. Elio Lago and Orel Ovil moved from three to one, Benjamin Niv played at two with Alex Richards who he has one won a doubles match with earlier this season, and All-American Marius Frosa teamed up with freshman Yi Jui Lo at three.