‘I like his positive attitude:’ Noah Fernandes bringing new light to Shockers lineup 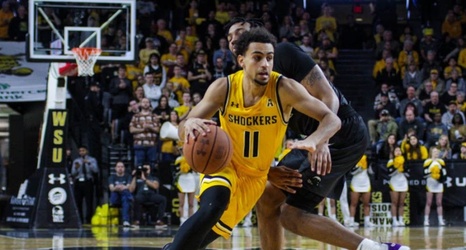 Wichita State freshman Noah Fernandes has quickly adapted to his new role. At the start of the season, many, including head coach Gregg Marshall, weren’t even sure if Fernandes would step foot on the floor for the Shockers after a bone bruise left him sidelined for weeks.

But Fernandes prevailed. He worked his way back into the lineup and played his reserve role. Marshall said he has faith that the freshman can factor big into the program’s future.

“He’s not big at all, and I don’t think he’s as quick as he was when he first got here before the foot injury, but he has an extra gear that hopefully he’ll go back to,” Marshall said.