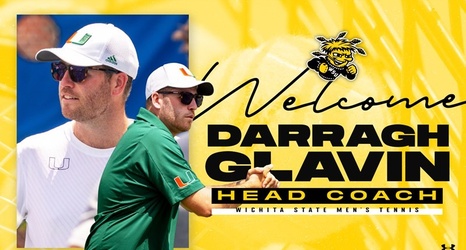 Wichita State has tabbed a rising star from one of the nation's most-successful programs as its new head men's tennis coach.

Darragh Glavin (first name pronounced "DARE-uh") comes to Wichita after two seasons as assistant coach at the University of Miami where he helped the Hurricane to consecutive NCAA tournament appearances.

"Darragh is a high-energy guy with a magnetic personality and a wealth of knowledge," Senior Associate Athletic Director, Brad Pittman said. "He's an up-and-comer in the tennis coaching world and we're thrilled to be welcoming him and his family to Wichita."

Originally from Ireland, Glavin was a four-year standout at Old Dominion (2012-16) before breaking into the coaching ranks as a volunteer assistant at Princeton (2017-19) and full-time assistant at Delaware (2019-20).